Richard Illingworth was the third umpire in the fifth and final ODI between India and Australia.

“Two doctors including a cardiologist are attending him. His condition is stable,” Tripathi added.

On October 1, Rohit Sharma achieved a memorable milestone with his classy century as India outplayed Australia by seven wickets in the fifth ODI to seal the series 4-1 and cement their number one spot in the ICC rankings. 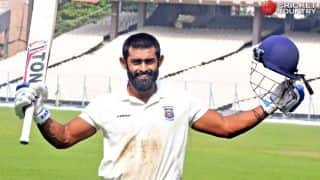