St. John’s: Rookie batsman Shai Hope has been rewarded for his heavy scoring in a recent First-Class tournament with a place in West Indies 14-man squad to face England in the first Test starting on Antigua on Monday.

The 21-year-old right-hander was one of two uncapped players selected in the squad announced on Friday, with fellow Barbadian Carlos Brathwaite also called up, reports CMC.

Brathwaite, 26, an intelligent fast-bowling all-rounder, has been on the fringe of Test selection for some time having already turned out in the shorter versions for the West Indies.

The squad also sees the return of Guyana leg-spinner Devendra Bishoo who last played Tests three years ago, but whose prolific wicket-taking in the First-Class tournament made him hard to ignore.

“It is always good when there is strong competition for places,” chief selector Clive Lloyd commented on Friday.

“A few players have been rewarded for the work which they have done, like Shai Hope, Carlos Brathwaite and Devendra Bishoo, but it will take some time to reach the standard of consistency that we all desire to see from our side.”

Hope, in his first full season of First-Class cricket, amassed 628 runs from nine matches, at an average of nearly 45, to be the fourth highest run-getter in the West Indies Cricket Board’s (WICB) Professional Cricket League (PCL).

Of special significance was his 211 against Windward Islands Volcanoes at Kensington Oval last month. The knock was the only double century of the competition and came on the heels of an unbeaten 111 against Trinidad and Tobago Red Force at the same venue in February.

Brathwaite, meanwhile, also enjoyed a decent season for Barbados, scoring 220 runs and grabbing 19 wickets at an impressive average of 18 apiece.

The right-armer, a handy lower batsman with a First-Class century who can also produce explosive spells, has already played One-Day International (ODI) and Twenty20 (T20) cricket and was part of the ODI squad to South Africa last January.

Bishoo’s new lease on life has come courtesy of his 61 wickets in the PCL, which was the second highest number in the competition.

He grabbed four five-wicket hauls and had a ten-wicket performance — against the Windwards in the last series of the PCL.

The squad will be led by Denesh Ramdin with opener Kraigg Brathwaite has his deputy, and includes the irrepressible left-handed opener Devon Smith whose 822 runs at an average of 54 with two centuries during the PCL made him a straightforward choice, especially in the continued absence of Chris Gayle.

Fast bowler Shannon Gabriel was unavailable for selection after sustaining a hand injury during the recent camp.

The series will be the first for West Indies under new coach Phil Simmons and Lloyd said there was a positive mood going forward.

“We have a new coach and we have to give him as much help as possible. He is a very positive guy, he has been successful and he is one of us,” said the legendary former West Indies skipper.

“We had a good chat after he was appointed and we have spent the last few days in further discussions about a number of things, so we are looking forward to see how it all works out.”

West Indies and England square off at the Vivian Richards Cricket Stadium in the opening Test before moving onto Grenada for the second contest from April 21-15.

The third Test is scheduled for Kensington Oval in Barbados from May 1-5. 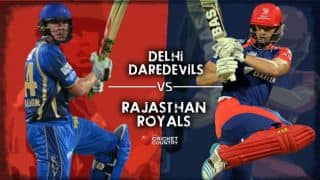