India relied on spinners Baba Aparajith and Harmeet Singh to pull off a thrilling 9-run victory over New Zealand and cruise into the final of the ICC U-19 Cricket World Cup here on Thursday. 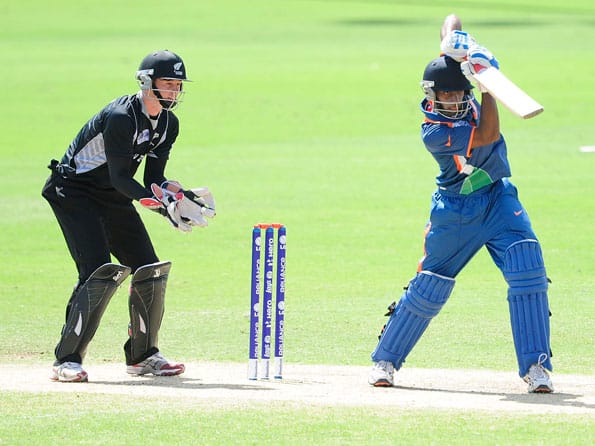 India relied on spinners Baba Aparajith and Harmeet Singh to pull off a thrilling 9-run victory over New Zealand and cruise into the final of the ICC U-19 Cricket World Cup here on Thursday.

Defending a modest total of 209, Indian bowlers maintained their consistency throughout as they restricted New Zealand to 200 for nine in their 50 overs to set up a title clash against Australia on Sunday.

Needing 18 off last over, medium pacer Sandeep Sharma kept his cool as he gave away only nine runs as India made it to summit clash quite comfortably in the end at the Tony Ireland stadium.

Young lad from southern Indian state of Tamil Nadu, Aparajith, got his second successive man-of-the-match award for his all-round show as he scored 44 before taking the important wicket of Robert O’Donell.

This is India U-19 team’s fourth appearance in the final of the tournament having won the 2000 and 2008 editions while they were runners-up in 2006.

A target of 210 was never a tall-order for the Black Caps colts but all-rounder Aparajith (1/29) and the young sardar from Mumbai Harmeet (2/30) stifled the set New Zealand pair of Cam Fletcher (53) and O’Donell (29) in the middle overs to set it up for the Indians.

While New Zealand lost the first four wickets for 63 runs, Carter-O’Donell duo put on 56 runs for the fifth wicket without much fuss. It looked as if New Zealand were cruising along towards victory before Harmeet-Aparajith applied brakes on scoring. Back to-back maidens in the 34th and 35th overs suddenly increased the pressure on the Kiwis.

As the pressure mounted, O’Donell closed the face of his bat to an off-break from Aparajith to offer a simple return catch as India made decisive inroads.

Indian bowlers have done a good job in the tournament and even today the pace trio of ‘U-19 veteran’ Sandeep Sharma (2/36), Kamal Passi (1/48) and Ravi Kant Singh (2/49) complemented the effort of their spinners.

The trio bowled well within themselves with Ravi Kant again producing an inspirational delivery. Connor Neynes (14) was yorked by the young Bengal pacer which certainly was the best delivery of the match.

Earlier, India’s middle-order frittered away the good start provided by the top half as the team posted a disappointing 209 for nine.

Opener Prashant Chopra was the top-scorer for the Indians with a patient 104-ball 52, followed by No 3 Aparajith who added 44 runs to the total.

Skipper Unmukt Chand also did his bit with 31 runs off 44 deliveries but the rest of the line-up let the team down against a disciplined bowling effort by the New Zealand team.

For the Kiwis, left-arm spinner Ben Horne was the top wicket-taker, picking up three for 23 in six overs, while medium pacer Matthew Quinn managed a couple of scalps.

It was a decent start to the proceedings for the Indians as Unmukt and Prashant put on 51 runs for the first wicket before the former made his way back after becoming medium pacer Connor Neynens’ only victim of the match.

Next man in, Aparajith took hardly any time to settle down and rotated the strike with ease.

Aparajith and Prashant combined to add 81 runs before the latter departed, caught one-handed by Kiwi skipper Will Young at mid on off Ed Nuttall’s bowling.

Prashant struck five boundaries and a six during his innings. Aparajith departed a couple of overs later, his 61-ball innings ended by Indian-origin spinner Ish Sodhi.

The rest of the Indian line-up failed to make notable contributions as the team were restricted to a disappointing total. (PTI)

Man of the Match: Baba Aparajith