Afghanistan were bowled out for 44 with Tyagi picking up a hat-trick in the very first over.

India geared up for their Under 19 World Cup title defence by inflicting a sound 211-run thrashing on Afghanistan in their first warm-up match on Sunday. Yashasvi Jaiswal and Tilak Verma recorded half-centuries to lead India Under 19 to 255/8 before Kartik Tyagi registered a hat-trick in his very first over. Afghanistan batsmen were no match for India and were bowled out for a meager 44.

After winning the toss and electing to bat first, India received an early jolt with opener Divyaansh Saxena for a golden duck in the first over but recovered through Jaiswal and Verma who added 121 runs for the second wicket. Jaiswal hit four boundaries and a six during his 97-ball stay before deciding to retire out. Verma was slightly slower of the two and he too retired out after completed his fifty.

Priyam Garg and Dhruv Jurel kept the scoreboard moving and added 51 runs in eight overs before the partnership was broken by Abid Mohammadi, who removed both batsmen in consecutive overs. India were provided a late lift through Atharva Ankolekar and Shubhang Hedge 25 off 20 with two fours as they went past the 25-run mark. Afghanistan employed as many as nine different bowlers with Mohammadi registering best figures of 3/19 from three overs, while Fazal Haque conceded 2/48 from nine overs.

The Afghanistan chase never quite took off. Pacer Tyagi removed three of the top four batsmen off the second, third and fourth ball of the innings. Wicketkeeper batsman Mohammad Ishaq was the only Afghanistan batsman to enter double digits, top scoring with 11. Tyagi’s wonderful bowling up front was backed by Akash Singh, Sushant Mishra and Hegde, who picked up two wicket each and bowled Afghanistan out inside 18 overs. 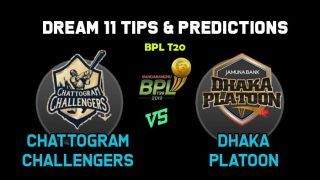