Amjad Ali is out for 14 off 30 deliveries as he drags the ball on back to his stumps off the bowling of Rahat Ali against Pakistan in ICC Cricket World Cup 2015, Pool B match at Napier.  He is soon followed by Andrei Berenger for just two as he was caught behind off the bowling of Sohail Khan in the very next over. This is a big blow for United Arab Emirates (UAE) as they were looking to get off to a good start in pursuit of 330. UAE openers Ali and  Berenger had gotten their team off to an extremely slow start as the Pakistan Bowlers were keeping it tight. LIVE BLOG: Pakistan vs UAE

Pakistan opening bowlers Mohammad Irfan and Sohail Khan were extremely accurate in their opening spell. Rahat Ali was then given an opportunity to bowl and he struck in his very first over. Sohail Khanthen returned in the next over and sent Berenger packing for a meek score. Pakistan will feel that they are right on top at the moment. SCORECARD: Pakistan vs UAE in ICC Cricket World Cup 2015

UAE had earlier won the toss and decided to bowl first. But it backfired as Pakistan set them a target of 340 to win. Pakistan will confident about this match as a win here will put them in contention for the quarter final spot. UAE will want to forget their humiliating loss to India and put up a decent show with the bat today. LIVE CRICKET STREAMING: Pakistan vs UAE 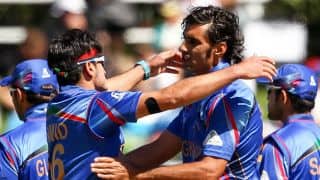