The winner of this clash will make their way to the semi-finals of this tournament with one match left in the league round.

United Arab Emirates (UAE) will take on Afghanistan in the match No. 6 in Group A of the ongoing Desert T20 2017 tournament. This match will be played at the Sheikh Zayed Stadium, Abu Dhabi. Afghanistan are ranked No. 9 in the ICC T20 World rankings while their opponent for the game on Monday night are ranked at No. 15. Both Afghanistan and UAE have registered a win each in the competition so far. Both teams have played one game each so far in the series and have won the same. While Afghanistan defeated Ireland by 5 wickets, UAE beat Namibia by 6 wickets. It is Afghanistan who are currently topping the group based on their Net Run Rate (NRR) ahead of UAE.

This encounter will be the second game for both teams and the team who will emerge victoriously will eventually go to top the Group A. UAE might consider themselves as the favorites to win this clash as they have the home advantage, but their opposition team is one of the rising forces in international cricket and this game won t be an easy task for them. In the first game between UAE and Namibia, three wickets from Mohammad Naveed and two from Zahoor Farooqi saw UAE limit Namibia to 152 for 7 in the 20 overs.

In their reply, UAE completed a successful chase on the final delivery with Muhammad Usman scoring the winning runs. Rohan Mustafa and Shaiman Anwar are the lynchpins for UAE and they will have to continue from where they left in the first game.

In the other game, Afghanistan stopped Ireland to 125 for 6 in the first 20 overs. Amir Hamza was the pick of their bowlers for Afghanistan with two wickets while Mohammad Nabi and Rashid Khan were also rewarded for their efforts with two wickets each. Najeeb Tarakai, top scored with 31 runs during their successful chase. Mohammad Shahzad and Nabi also made important contributions with the bat.

The winner of this clash will make their way to the semi-finals of this tournament with one match left in the league round. Both teams know what is at stake when they enter the field. 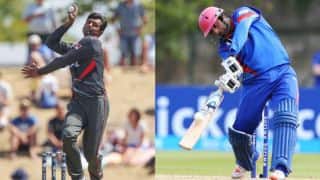 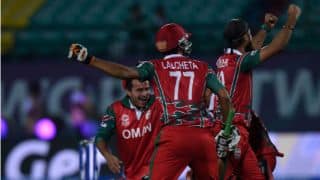