Unmukt Chand asserts he is no celebrity

Unmukt Chand asserts he is no celebrity

Unmukt Chand, the India under-19 World Cup winning captain has catapulted into national limelight and transformed overnight into a star, but the youngster is not ready to consider himself as a celebrity. 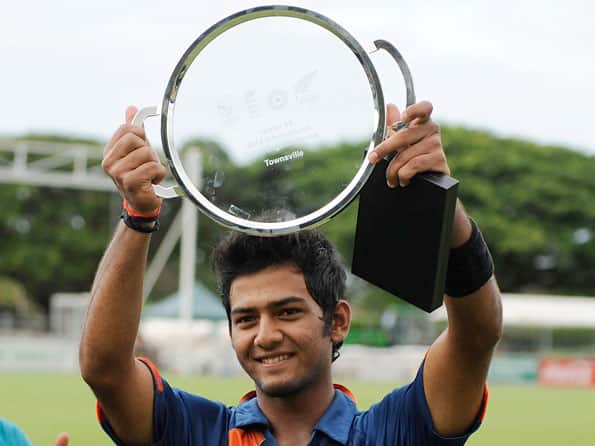 Unmukt Chand, the India under-19 World Cup winning captain has catapulted into national limelight and transformed overnight into a star, but the youngster is not ready to consider himself as a celebrity.

“I am not,” he said with a smile, when asked if he is a now a celebrity! But a stream of functions to felicitate his achievements has left him astonished. “Honestly I am surprised. A pleasant surprise.”

Unmukt said he was happy that young team gave the people of India a chance to celebrate.

The 19-year-old said nothing can distract him from his cricket and he wanted to purse to the game without letting it affect his studie.

“Absolutely nothing can shake my resolve! I loved cricket and always wanted to make runs. I also knew that education was equally important. I managed my time well thanks to my parents (Bharat Chand Thakur and Rameshwari). My uncle (Sundar Chand Thakur) was a big influence. In fact he ensured I did not lose my focus in cricket. I pursued cricket but not at the cost of education.”

Unmukt has grown into an attractive cricketer and a credit to the game. The desire to excel on the cricket field was stoked by his ability to grasp.

“Speaking to seniors was part of my growing up process. When you speak to a senior, you learn the best aspects of the game. Even in life, I have always been attentive when my seniors speak. To be in that position (getting guidance) is a privilege many just don t enjoy. I was privileged.”

The Delhi batsman said to be picked to lead the India under-19 team was a “huge” responsibility. As chairman Abey Kuruvilla observed, “He is a very good cricketer and a very level-headed youngster. I was amazed at the calmness that he brought to his job. He is academically accomplished and that helps him when leading the team. He is such a keen learner and we always knew he could deal with any situation on the cricket field.”

Unmukt is not amused with the comparisons between him and Virat Kohli.

“Why should there be comparisons? He is one of the best batsmen in the game today and his consistency is something I would like to ape. But right now it is too early to make any comparisons with anyone or predict what lies ahead. I have just taken the first few steps in achieving my goal and I know it is going to be one gruelling journey. I am focussed.”

Unmukt said he s a “relieved” person he got embroiled in a controversy concerning attendance and subsequent ticket to write exams. The issue was solved after much debate.

“I love my college. I knew they would find a way,” Unmukt, a student of St. Stephen s College, was quoted saying by the Hindu.

“I would have loved to see him get a hundred last season. After the excellent century against Railway in his debut season, he promised a lot. He is gifted but he is sometimes too enthusiastic to play his shots early in the innings. He must study the pitch and the conditions and then choose his strokes. On a placid Kotla track, he can get away, but on challenging pitches, when the ball seams, he will have to be careful. I have seen him getting out behind the wickets or sometimes to the square cut. He is an outstanding cricketer no doubt. He has to be mentally sharp and patient too because under-19 is different from first-class where you play against top class bowlers all the time. You can t get away with reckless shots because the bowling and fielding standards are better. They are constantly planning to get you out. The gap between under-19 and Ranji is huge. It would be too early to accept too many results from him. I want him to now focus more on first class cricket and climb the ladder to international cricket step by step. Being an opener, he has to be technically sound. I know he has the potential. He is a good student on and off the field. He must use his education to back himself. My advice to him at this stage would be to keep his feet grounded and not get carried away. If he continues to bat sensibly I know he will go very far.”

I will say his strength is his huge talent. He has always been very focused, sincere and determined. His weakness, if there is one, is the overconfidence that sometimes hampers his progress at the crease. He wants to flay every bowler and it is not always possible, not at his age. I would like to see him more balanced. He is a well-behaved lad and always listens to what you tell him. I have interacted a lot with him in under-19. I used to speak to these youngsters in a group and would begin by listing my own weaknesses. He always followed what I said, understood and executed the plans well. That was a plus point for a budding cricketer. I have scolded him too and sometimes even after he would have scored a century. He is good at learning and adapting. He has understood it is not profitable to play too many shots too early in the innings. He has to be choosy in his shot selection. I am sure it will come with maturity. He is a very hard working boy. He looks to play on difficult pitches so that he can prepare adequately for the big league. He likes to spend time with seniors and interact with them. Now that he has played two seasons of first-class cricket he has to focus on being more consistent. He has made a mark and should look to grab the opportunities. And yes, he should be careful about all this hype around him.

I am just not qualified to judge his cricket but I always knew he had huge talent. I had heard people speak about this young strokeplayer and I can vouch for his amazing focus. Nothing can distract him and he remains very grounded and mature for a 19-year-old. We have been good friends and it helps a lot in sports management. I found him articulate and I can say he is a good orator. He handles the media so well. Good thing about him is he concentrates a lot on his studies, doesn t waste time. He is at his best when at home with his family. He is also deeply religious. I see him as a perfect teen icon. I was with him throughout the under-19 tournament and I saw from close how he led the team. Before the final, he just wanted to relax and take his mind off cricket. We watched Due Date, a brilliant comedy. He was in a zone during his knock in the final and swung the match alone. The boys just loved him for his knock that day. It was a huge step towards achieving his goal. After the final, we had a nice party at an Indian restaurant. The rule of the party was no one was allowed to carry mobile phone. There was no music even though we had some dhol after a while. We created our own club and danced on the streets of Townsville. It was great fun indeed.”