Unmukt Chand has captained India A and Delhi team previously.

Unmukt Chand, who is in his prime form in domestic cricket for his Delhi team, was dropped for the entire Ranji Trophy season in 2016-17. That failed him to land an IPL contract then. In 2017-18, too, Chand was dropped from the Delhi squad for 4 matches of Ranji Trophy. He was, however, called back to the Delhi team for the Vijay Hazare Trophy. Chand s omission has hurt his IPL opportunities for the second time. His axing during Ranji Trophy came a month before the IPL auctions. Chand blamed Delhi team management s internal politics for halting his career s progress.

Chand also revealed he is planning to play for another state with the ongoing petty politics. At the moment, Chand is on a mission of making a comeback. He has scored 400 runs from last 8 matches for Delhi. In an interview with The Times of India, Chand opened up about his omission, his comeback and disappointment on losing an IPL contract:

On omission from Delhi team: Getting dropped from Delhi was the biggest disappointment of my life. I became the scapegoat of petty politics in the team. I was playing a T20 zonal match in Mumbai two years back when I heard the news of getting axed from the one-day side. I was leading India A in a couple of months before that and was the highest scorer there. I had been the top run-getter for Delhi the previous season, and I was dropped. That was shocking.

On losing an IPL contract: I was retained by MI last year but because I didn’t get to play matches in the previous year, I decided to get released from the squad to find a team where I could play, and not sit out, even at base price. It was a hard decision and a big risk too, but I opted out. Unfortunately, I was dropped from the Delhi side four days before the auction, and I’m sure it didn’t send the right signal to the franchisees. I wasn’t picked.

On playing for another state: Yes, I have thought about it. I have been forced to think about it. However, things are still not concrete. I had lived my biggest fear of getting dropped from the Delhi Ranji team, and thus overcame the fear by only realising the next day that it was a mental barrier and nothing else. I went beyond the fear. It liberated me. 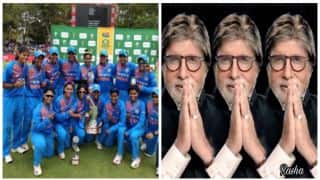