India A secured a thrilling innings and 30 runs victory in the final session of Day 4 of their first unofficial four-day Test against South Africa A in Bengaluru on Tuesday.

India A secured a thrilling innings and 30 runs victory in the final session of Day 4 of their first unofficial four-day Test against South Africa A in Bengaluru on Tuesday to take 1-0 lead in the two-match series. At the start of the final session, it seemed the visitors will be able to secure a fighting draw before losing their final five wickets late in the day to bowled out on 308.

South Africa A started the day on 99/4, still trailing India A’s first innings total (584/8d) by 239 runs. Rajneesh Gurbani then got rid Zubayr Hamza on 63 in the morning session to reduce them to 121/5. However, the pair of Rudi Second and Shaun von Berg began the rescue act, stonewalling the home bowlers. Together they added 119 runs for the sixth wicket, steadily diminishing India A’s hopes of securing a win.

The pair adopted the safe approach and South Africa A took lunch without losing another wicket at 162/5. They successfully negotiated the second session too, adding 67 runs in 26 overs. However, eight overs into the final session, Gurbani managed to break the stand as he had Von Berg caught on 50. But India A had to wait another 12 overs for their seventh wicket when Dane Piedt (8) was caught off Navdeep Saini.

Legspinner Yuzvendra Chahal then landed the major blow when he trapped Second with the final delivery of the 116th over. The South African missed out on yet another deserving century by just six runs but more importantly, he had consumed 214 deliveries for his 94 the same score at which he was out in the first dig. His innings was studded with 15 boundaries.

That wicket renewed Indian hopes but the South African tailenders put a brief fight with Malusi Siboto remaining the unbeaten batsman on 7 off 50 deliveries. Axar Patel got rid of No. 9 Beuran Hendricks (10) before Siraj completed his five-wicket haul with the scalp of last man Duanne Olivier (0).

The second unofficial Test starts from August 10 at KSCA Cricket Ground in Alur. 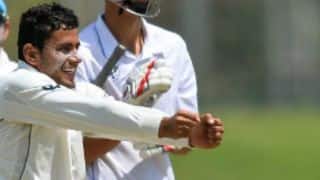