Broad said that workload management would be key, particularly for the fast bowlers, going into a gruelling five-Test series which is going to be played within six weeks.

Stuart Broad says he and his fellow England pacemen may have to accept being rested during the upcoming Test series with India. A packed schedule of five Tests in barely six weeks is one almost designed to work against fast bowlers on both sides, particularly if the recent soaring temperatures in Britain are maintained throughout August.

England’s experienced new-ball duo of James Anderson, the national all-time leading Test wicket-taker, and Broad both proved their fitness in the recent round of County Championship matches. But while they won’t want to be rested, Broad, speaking ahead of the series opener at Edgbaston on Wednesday — a match that will be his 119th Test and England’s 1,000th — said they were prepared for the possibility.

“I think there has already been small conversations saying about, ‘Don’t be disheartened if you are left out for a Test match, it’s not a personal attack or dropping, it’s a management of your bowlers to make sure we give ourselves the best chance’,” he told reporters at The Oval.

Broad had a recurrence of ankle trouble prior to making his return for Nottinghamshire, while earlier this season Anderson took time out to manage a recurring problem in his right shoulder. Looking ahead to how England might manage their quicks, Broad said: “I think will have to play that by ear — it will depend on tosses, pitches, workloads. “If (there are) two Tests of 250 overs in the field each, it’s unrealistic to think your seam bowlers will play five Tests in six weeks.

“But if you have a Test where you bowl them out in 80, 60 overs, that changes your thinking.” Broad reported no ill-effects after bowling 19 overs for Nottinghamshire in their innings defeat by First Division leaders Surrey at Trent Bridge. “I had no pain after the game,” he said. “I am going in (to this series) 100 percent fit and you can’t say that too often.”

Unless there is a marked change in the weather — and rain did fall across large parts of England this weekend following a prolonged dry spell — pitches during the series could be more akin to those normally found in India.

“We have the advantage of home conditions — or how ‘home’ they will be is debatable,” said Broad. “But we still (have) our home crowd, home grounds. India, however, are likely to have plenty of support too, with some of the matches during the preceding one-day series almost ‘home’ games for the tourists in terms of the balance of the crowd,” Broad added.

Broad, now a Test specialist, said: “I don’t think I have ever felt overwhelmed by a opposition crowds in a home ground .. actually, maybe once at Lord’s during the 2009 World Twenty20, we got booed as walked on. “But I think it’s great a lot of Indian fans will support their team but we’ll get England fans as well. The one-day guys said their crowds were supporting India but they said they enjoyed the cricket, it wasn’t abusive to either side, so we’ll expect that in the Test as well.”

India boast one of the strongest batting line-ups in world cricket, with Virat Kohli leading the way. But Broad said he had no special plans for the India captain. “The history of Test cricket will suggest that if you hold the top of off-stump longer than anyone else you’ll have success,” he said. “So in England particularly, it’s about owning the off-stump. I really don’t agree with the theory that one particular bowler can target a batsman. With a world-class batsman you have to have that pressure and theatre at both ends against that sort of quality. That’s when you get mistakes,” Broad opined. 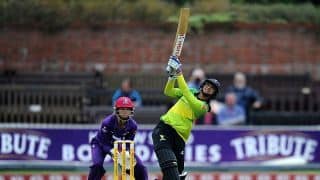