Bangladesh take on the Netherlands on Monday hoping to build on a memorable World Cup win over England that has thrown open the door to the quarter-finals. 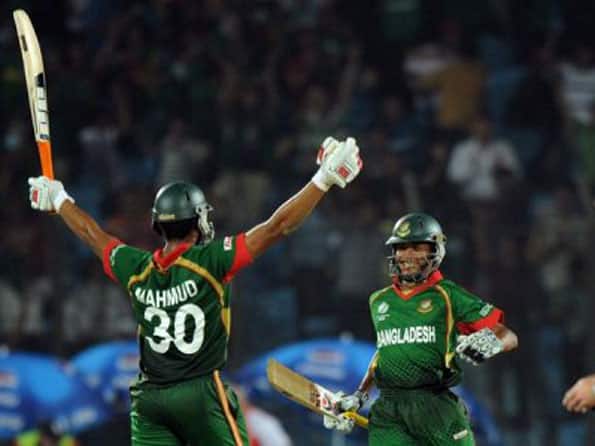 Bangladesh take on the Netherlands on Monday hoping to build on a memorable World Cup win over England that has thrown open the door to the quarter-finals.

An unbeaten ninth-wicket stand of 58 between Mohammad Mahmudullah and Shafiul Islam helped the Tigers snatch an improbable win over England on Friday and resurrect their faltering campaign.

Bangladesh had plunged to 169-8 chasing England’s modest 225 when the gutsy lower-order duo turned the tables in the day-night match at the Zahur Ahmed Chowdhury stadium in Chittagong.

Bangladesh, co-hosting the World Cup for the first time with India and Sri Lanka, suddenly find themselves back in the reckoning for the second round from the unpredictable Group B.

With four points from as many matches, the Tigers must still beat both the Dutch and powerful South Africa in their remaining league matches to cement a place in the quarter-finals.

But a victory over the Dutch can also help Bangladesh advance if England, who have five points, lose their last match to the West Indies in Chennai on Thursday.

Bangladesh captain Shakib Al Hasan urged his team-mates not to let the opportunity slip. “Beating England has opened the way for us and we must take advantage of that,” Shakib said.

“We now have a very good chance to make the quarter-finals. We must focus on our two games. We don’t want to go out of the tournament early.”

Shakib admitted he sensed defeat looming when Bangladesh lost their eighth wicket, but praised both Mahmudullah and Shafiul for their fight back. “Frankly, it is hard to believe that we won,” he said. “This was not a normal game by any means. No one gave us a chance but those two were really brilliant.”

Bangladesh bounced back to stun England in a must-win just a week after being shot out for their lowest one-day total of 58 by the West Indies in Dhaka.

Shakib praised his team’s determination to come back after heavy criticism from the local media and former players over the embarrassing loss to the West Indies. “I always believe in my team,” he said. “We have really good guys who are honest about their work, they can work really hard, day in and day out.

“If you have a bunch of guys like we have, we will always have the belief we can come back from any situation.”

The game on Monday against the Dutch will be played during the day, unlike the one against England where skipper Andrew Strauss complained of excessive dew under lights which hampered his bowlers.

The Netherlands, a non-Test nation, have lost all their four matches so far and will have to lift their game to beat the Tigers in their own den.

The Dutch extended England in their opening game, but then lost to the West Indies by 215 runs and were thrashed by South Africa by 231 runs, before bowing to India by five wickets.

Dutch captain Peter Borren admitted his team had been inconsistent in the tournament, but looked forward to gaining their first win against either Bangladesh or Ireland. “We’ve been inconsistent,” he said. “It’s never easy. We don’t get to play at this level very often. But we still want to get a win or two on the board.”

Not all over for us, says Strauss