Permission for an international match is first sought from the state government at Green Park.

In a bid to boost cricket facilities in the state, the Uttar Pradesh Cricket Association (UPCA) has announced the construction of three international stadiums.

UPCA secretary Rajeev Shukla had announced in a press conference last week that three cricket stadiums would soon be coming up in Kanpur, Ghaziabad or Agra and in Prime Minister Narendra Modi’s constituency Varanasi. The UPCA has been looking out for land in various state centres after the association failed to construct a single stadium in the past 20 years.

Though Kanpur’s Green Park has been UP’s regular Test venue since 1995 UPCA CEO Lalit Khanna told ‘PTI Bhasha’ that the stadium, which was part of the ‘Modi trust’ owned by two businessman brothers of the city, was in the the state government’s hand but was leased to the cricket association.

But lately the venue has once again fallen in the hands of the UP government and UPCA since has been on the lookout to make a stadium of its own. “Till now a plot of land has not been allotted to build a stadium but we are continuously trying to get land somewhere near Kanpur,” said Khanna. It was pointed there that he had been ‘trying’ since past 20 years, to which Khanna replied that this time the efforts are serious and “we hope to finalise the land in two-three months but even then, a stadium of international level will take three-four years to be established.”

Since the Green Park stadium is under the Uttar Pradesh Sports Ministry, permission for an international match is first sought from the state government and a fees of Rs 1 crore is also paid to the government. Besides the fees, officers are given passes free of cost and other facilities by UPCA. Due to the freebies provided, half of the passes for the 40,000 stadium goes for free and only the remaining are available for public.

Khanna informed that they are not only trying to get a stadium owned by UPCA in Kanpur, but are also working towards signing a MoU with the government of Uttar Pradesh to get the Green Park stadium on lease.

“UPCA secretary Rajeev Shukla is in constant touch with the the government and we hope that the MoU is signed as soon as possible,” added Khanna. He further said that if things proceed well, then by 2018 UPCA’s own stadium will also be ready and then we can think of hosting IPL matches in Kanpur. 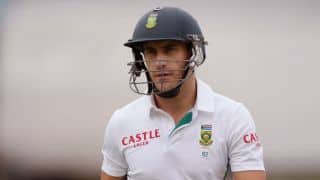