The USA Cricket is the new board set up under the world cricket governing body's supervision to administer cricket in the United States of America following the expulsion of USACA last year.

Dubai: In another significant milestone for cricket in USA, a four-member Nominating and Governance Committee (NGC) has been announced to seek recommendations for the three independent directors for the board. ICC Chief David Richardson will be part of a four-person committee, which will be responsible for identifying and recommending three independent directors for the USA Cricket.

The USA Cricket is the new board set up under the world cricket governing body’s supervision to administer cricket in the United States of America following the expulsion of USACA last year. Amy Perko, chief executive officer, Knight Commission on Intercollegiate Athletics, former Guyanese U-19 team skipper Keith Aaron and former Hong Kong U-19 captain Rohan Chandran will complete the four-member panel.

The committee comprises experts with a diverse range of backgrounds from both within and outside cricket and is universally recognised leaders who collectively bring together significant knowledge and independence to this critically important role.

Reflecting on the same, ICC Chief Executive, David Richardson said, “This is another positive step forward in USA Cricket’s journey under the guidance of the Sustainable Foundation Advisory Group on the pathway set out under the USA Cricket Constitution that was approved in December 2017.”

The three independent directors that the NGC is charged with finding – at least one of whom must be female – should not have held any cricket governance or administration roles for at least the past three years.

This composition will ensure a balance of constituent and non-constituent Directors and will enable USA Cricket to recruit skill sets and backgrounds to complement those of the seven other constituent directors who will be elected by the registered individuals, clubs and leagues in due course. The NGC will also lead the election process of the inaugural Board of Directors of USA Cricket and will be vetting all candidates for compliance against the criteria set out in the USA Cricket Constitution. 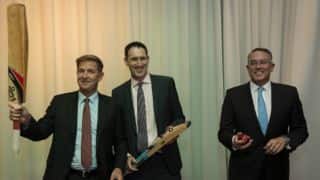