He may have won six Olympic gold medals and eight World Championships becoming the fastest man on earth but legendary Jamaican sprinter Usain Bolt as a child dreamt of becoming a Test cricket sensation. 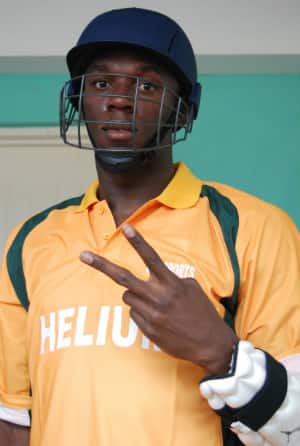 He may have won six Olympic gold medals and eight World Championships becoming the fastest man on earth but legendary Jamaican sprinter Usain Bolt as a child dreamt of becoming a Test cricket sensation.

And once he hangs up his running shoes, Bolt wants to become a professional footballer in a club in England.

In fact, had Bolt not specialised in the track and field event, he would probably have played cricket, smashing sixes and taking wickets, says the athlete in his first full-length autobiography Faster Than Lightning published by Harper Collins.

And why not? For, Bolt was excited to watch the likes of other Jamaican and West Indies cricket icons in paceman Courtney Walsh and batting legend Brian Lara, who was from Trinidad and Tobago. He hung out with friends “smashing sixes around the school field” in his hometown.

“I really liked the kids who enjoyed cricket and I would hit it off with anyone who had a bat and a ball”, said Bolt.

Bolt believes he had all the ingredients to become a good cricketer — bowling with speed coming down hard on batsmen, a fast fielder and as a batsman.

“In cricket, when I bowled, I could come down on the wicket hard, with speed and I was quick in the field… At the age of eight, I was taking wickets of cricketers a lot older than me, guys that were 10 or 11 years old… It wasn’t long before I had opened the batting for Waldensia (his village school) a couple of years earlier than most kids even made the team”, he said.

“I loved cricket but I never thought I could make anything of my speed other than as a bowler.”

Bolt acknowledged that track and field was not something that had interested him before.

“My dad Wellesley was a cricket nut, and so were all my friends. Naturally, it’s all we talked about. Nobody ever conversed about the 100 metres or the long jump at school.

“All the fun I needed came from taking wickets. Running quick was just a handy tool for taking down batsmen, who were of my height and strength”.

Bolt was so drawn to cricket that his only problem with going to William Knibb High School “was that the school didn’t want me to play cricket any more, not seriously any way.”

“I was 11 years old and I was hoping to take Physical Education lessons, pick up my pads and bat and continue with my dream of becoming a Test sensation,” said the sprinter reminiscing of his school days.

It was at that point of his life that his Physical Education teacher in school motivated him away from cricket and into track and field.

“Bolt, if you do well in track and field, it’s on you and no one else. In cricket, there are other people involved because it’s a team sport… You could play well, better than anyone else, but if the coach has a favourite, then you might not get picked. That happens quite a lot in life and it’s unfair. But in track and field, you are the boss of yourself”, said the teacher to Bolt.

Other than cricket, Bolt is as strongly attracted to football, an attraction which almost cost his life three years ago when he was driving his car with great speed on a highway in Jamaica in a bid to catch up with his favourite club Manchester United‘s match in the Champions League semi-final on TV and met with an accident.

Towards the end of the 278-page autobiography, Bolt expressed his desire to become a professional footballer for a team in England by the year 2016 if he can’t race at the top level by then.

“When I finish with track and field, I’ll change sports and move on. If I can’t race at the top level by 2016, then I want to turn my hand to another game — football, most probably because I can play and with enough effort I can get better.

“I reckon I could add something special to a team in England”, said Bolt, avowed Manchester United fan since he was a child, who would turn on the TV every Sunday hoping the club would be playing.

Pointing to some wingers (without naming them) in the English Premier League, who he said “have not been that great” or “haven’t been able to cross the ball with any accuracy, Bolt added, “I can pick up a pass, take on a few players at speed and create goal-scoring opportunities.”

“I’m not saying I’m the next Cristiano Ronaldo, but I’m a speed guy with skill. Imagine, what I could do with a lot of practice”, brimmed Bolt.