Bolt will play an exhibition match against a team which will have some of India's top cricketers.

Laughing off questions on potential challengers, Jamaican sprint legend Usain Bolt turned on the charm offensive on his maiden trip to India, throwing humility out of the window to declare that his records are pretty much out of reach. Bolt will play a seven-a-side exhibition match against a team which will have some of India’s top cricketers. The four-over match will be played with Team Bolt comprising his best friend Nugent Walker Junior and Indian spinner Harbhajan Singh among others.

The rival team would be led by all-rounder Yuvraj Singh, who will have his long-time friend and renowned pacer Zaheer Khan among others in the team. The face-off is titled ‘Bolt and Yuvi ? Battle of the Legends’.

The imposing sprinter, the first man to hold both the 100 metres and 200 metres world records, was at his wittiest best while facing the media at a promotional event here. Asked if his 100m record of 9.58 sec would ever be broken, Bolt said with a straight face, “That’s pretty much out of reach.” Amid a round of applause and some laughter, the ‘fastest man on earth’ added that his rivals would have to work really hard to match his greatness.

“As an athlete I have seen records come and go. They have always been broken but if you want to be as great as me, you have to work very hard. That’s why my records will stand the time,” he said. There was more to come when questions turned on whether he thought anybody among his contemporaries were good enough to beat him.

“Nobody,” said Bolt after chuckling at the question itself. On a more serious note, he said “Track and field is a weird sport. It’s all about focus and mental capacity. It’s hard to pick any one person but my coach thinks Justin Gatlin is good. Tyson Gay, Yohan Blake, so many guys are coming up. But I am not going to let anybody beat me!” Cricket is his other passion but asked why he took up sprinting instead of the gentleman’s game, Bolt said “blame it on my dad”.

“My father is a huge cricket fan…but when I got higher secondary, I had two options — cricket or athletics. My dad said because of the system in Jamaica, it would be better to take up athletics. He said, you just have to run fast in athletics while it’s tougher to get into the national [cricket]  team.”

Among other things cricket, Bolt was also quizzed as to who, in his opinion, could be as fast as him, Bolt, after some deliberation, “AB de Villiers.” On to Indian cricketers and Bolt was asked what target he would set for Harbhajan Singh and Yuvraj Singh on track. “… would give them 14.5 seconds to get past the 100-meter finishing line …that should be funny,” he said with a grin.

Asked bout his sporting idol growing up, Bolt said he looked up to basketball player Kevin Garnett. “Kevin Garnett was my idol who I was looking up to when I was growing up. I wanted to achieve what he had in his game,” he said. The legend was also asked for his suggestions on how to make India a more athletic nation.

“We have to make the sports attractive to younger generation. When I was growing up, everybody wanted to play cricket all the time. Now they want to run as well. The sport should be encouraged at school levels,” he said. Asked whether he was looking for a career in acting, Bolt said, “I don’t think I am a very good actor. I don’t know may be or may be not because all my life I just lived for sports …But you never know what future holds.” The 26-year-old sprinter had reportedly been approached by Hollywood producers for embarking on a new career as a big-screen action hero. 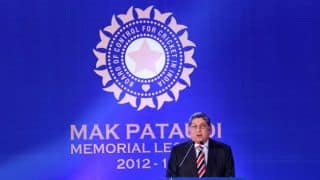 India vs England 2014, 4th ODI at Edgbaston: India off to solid start