Harbhajan was amazed at Bolt's training and his meticulous planning.

Getting a chance to interact with two global sporting legends in a space of two months is an experience in itself and Indian off-spinner Harbhajan Singh feels “blessed” to have interacted with Pele and now Usain Bolt.

What completely floored Harbhajan was the manner in which Bolt, the ‘fastest man on earth’, bowled during the exhibition match in Bangalore yesterday.

“I think cricket is there in Usain Bolt’s blood. Since I got to watch from close quarters, it was amazing to see him run-up to bowl. The perfect delivery stride is understandable because he is a world champion athlete. But the manner, he loaded at the crease and then bowled the ball left me zapped.

He looked like a natural cricketer. Probably, he would have been as successful playing cricket as he had been in athletics,” Harbhajan, who played alongside the Jamaican legend in the match, told PTI on Wednesday.

Harbhajan, who was in Brazil during the FIFA World Cup had an opportunity to meet Pele but this was “even more special” as the interaction with Bolt was lengthier.

“It was a wonderful feeling when Bolt came up to me and Yuvi and said ‘I have watched your matches and great to know you guys’. It was great to know while interacting that he is so passionate about cricket,” Harbhajan said.

The senior off-spinner in fact asked Bolt that why did he not take up cricket. “He (Bolt) told me that his coach told him that he was better in athletics!”

Harbhajan spoke at length about Bolt’s training schedule and was amazed at the kind of meticulous planning that has gone into chalking out each and every plan.

“He explained to us as to how his training routine changes during competition time and other times. He has a very different regime as he approaches a competition just like we have a different approach on the eve of the match to other times. If you come to know his detailed training schedule, you would know how much of hard work had gone into making of a champion,” said the 34-year-old bowler.

But for Harbhajan, the most endearing part of yesterday evening was the manner in which Bolt interacted with the fans, who had come all the way to the Chinnaswamy Stadium to watch him.

“Bolt’s way of mingling with fans really touched my heart. It is a lesson for celebrities from all walks of life that it’s the fans that has made us who we are. Long after the event ended, there were a number fans on the other side of the stadium anxiously waiting to catch a closer glimpse of Bolt.

“He walked all the way to the other side, shook hands with at least hundred of them. Imagine how special those young boys and girls must have felt to watch the great man from such close quarters.

“Bolt’s behaviour is a lesson for one and all that if we want stardom, we have to also gracefully accept what comes with it. He told us that he would be now travelling to US for other commitments. He is successfully juggling his duties both on and off the field,” said India’s third highest-wicket taker in Test matches. Harbhajan will soon be travelling to Raipur to play in Mumbai Indians’ qualifying games in the Champions League T20. 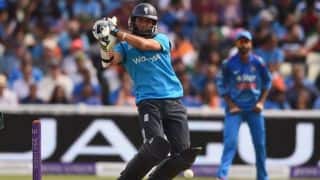