Usman Khan registered the third-quickest five-for in ODIs since 2001.

Playing in his second ODI, Usman Khan ran through Sri Lanka’s half the side in 3.3 overs. Yes, you read that right. Nipping it both ways, the 23-year-old caused a gasp of horror and further pulverised the already-wounded Sri Lankans, ending their misery at 103 all-out.

Openers Fakhar Zaman and Imam-ul-Haq added 84 together, helping Pakistan chase the paltry total in 20.2 in overs.

Before Sadeera could decode Usman’s delivery, it had pierced his defence. Trying to play it on the up and with the angle, Sadeera was fooled by a late in-dipper.

Chandimal could have let the ball go, but it was the first delivery he faced. Pitched in the corridor of uncertainty, Chandimal was force to jab at an out-going delivery. Sarfraz took an easy catch.

Usman has a skiddy action. He gives an impressive that he will slip during the time of delivery. Tharanga perhaps was outfoxed by his skittery action. The ball snorted back in and uprooted the stumps. Tharanga looked clueless.

Dickwella did well to get in the line of the delivery, but failed to put the bat on it. It was another in-swinger, this time trapping a southpaw in front.

Of all the remarkable wickets, this was the softest of dismals. Playing away from his body, Siriwardana drove straight to Fakhar at backward-point.

Usman Khan ended his first spell with figures of 5-0-24-5. This was the third-quickest five-for in ODIs since 2001 first being Chaminda Vaas (16 balls) against Bangladesh in 2003.

Side note: Usman Khan had replaced an injured Mohammad Aamer for ODIs.

When Anil Kumble was en route his 10-wicket haul, Javagal Srinath had blasted VVS Laxman for attempting a catch in the slips. The anticipation was same when a Sri Lankan tried to gave away his wicket to another bowler. If anything, it created some excitement in an otherwise one-sided boring series. However, Sarfraz replaced Usman Khan with Hasan Ali, and the No. 1 ODI bowler spoiled the party and sent Thirimanne back. Soon, in the process of saving himself from a throw, Seekkuge Prasanna failed to ground his bat while he reached the crease.

In reply, Pakistan created an encore of a brilliant bowling performance while Sri Lankan bowlers had another bad day at work. 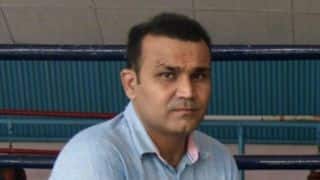