"Dad forced me to play cricket and today I look back and feel happy for myself for whatever I've done." - Usman Khan

Usman Khan‘s five-wicket haul was only the third quickest since 2001. He achieved the feat in 21 deliveries during the fifth and final ODI between Pakistan and Sri Lanka at Sharjah Cricket Association Stadium.

It was his stellar spell that bundled out Sri Lanka for 103 in 26.2 overs. In reply, Pakistan took a mere 20.2 overs to emerge victorious. This was their first whitewash over a side since 2008, in the format.

After the match, Usman Khan explained how opportunities helped him gain confidence. “It was not that easy. I’m gaining confidence with every opportunity I’m getting. I want to perform well and that’s my desire no matter which side I play for.”

How did Usman Khan pick cricket as career?

“Dad forced me to play cricket and today I look back and feel happy for myself for whatever I’ve done. I’m dedicating this special performance to my parents. The coach and the staff keep telling me to focus on the basics and that’s what I try to do,” said the 23-year-old.

It was only his second ODI that he managed to make headlines with his fast-bowling mastery. He made his debut in the fourth ODI of the series, picking a mere wicket. 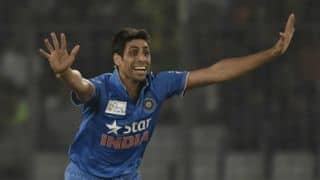