Seelaar van der Merwe guided the Netherlands to the final, while a superb bowling effort from PNG saw them successfully defend 130/5 and down Namibia.

Captain Pieter Seelaar and allrounder Roelof van der Merwe guided the Netherlands to the final of the ICC Men’s T20 Qualifier final where they will play PNG. Netherlands saw off Ireland by 21 runs to book their place in the final while PNG beat Namibia in the second semi-final.

Batting first Netherlands put on a good score of 158 for four thanks to Ryan ten Doeschate (43 not out), Ben Cooper (37) and Roelof van der Merwe (25 not out) all contributing with the bat. And then when with the ball it was down to Seelaar (three for 17) and Van der Merwe (two for 19) to put the pressure on and reduce Ireland to 137 for nine from their 20 overs.

In the second semi-final, a superb bowling effort from PNG saw them successfully defend 130/5 and down Namibia. Sese Bau’s unbeaten 40 dragged his side up to a competitive total and a suffocating collective effort in the field, led by Jason Kila with ball in hand, saw them home by 18 runs.

“If you win a game by a margin of 20 runs then you have to be happy. With the likes of Ryan ten Doeschate and then Roelof van der Merwe batting at the end, there are not many better players in this competition, or probably the world, who can finish it off and they got us close to 160 and we felt comfortable defending that,” Netherlands captain Seelaar said.

“The pace bowling got praised against UAE, but Ireland batted very well but I don’t think the pace was as consistent as they were earlier in the tournament. It was then nice to have Roelof (van der Merwe) and myself coming in the middle.”

Ireland captain Gary Wilson said: “Having won the toss we were disappointed they were able to put on 160. Netherlands have a lot of experience in the middle overs and they have the experience that we don’t have. We have a lot of talent in this squad but we are possibly missing a bit of experience. Looking back I think they probably got 20 runs too many, 140 would have been a good chase.”

In the other game, electing to bat first, PNG lost three wickets in the powerplay with opening bowlers Ben Shikongo and Christi Viljoen turning the screw. A half-century stand between Charles Amini and Bau steadied the ship, but tricky medium pacer JJ Smit held sway in the middle overs to restrict PNG to 130 for five from their 20 overs.

JP Kotze and Stephan Baard forced the issue in the powerplay but Namibia struggled in the second half of their innings, losing wickets at regular intervals. Pacer Norman Vanua starred with a sensational 2-16 from his four overs, including bowling the final over, and was one of eight bowlers used that contributed to a stirring effort in the field.

“It’s tough playing games like that Namibia is a really good outfit and you can’t make any errors when you play against them,” said Vanua. “It was hard to hit when you took the pace off, it held up in the wicket. We knew our bowlers could execute when they did and it came off for us.

“I’ve played Namibia a couple of times now and I know what most of the batsmen can do. When I came on, my mentality was to bowl stump-to-stump, mix it up as much as I could and put the hard work in.”

Namibia captain Gerhard Erasmus said: “It was a tough game of cricket. We need to learn what we can about conditions to try and beat a good Irish team tomorrow.

“The emotions were there to see when we qualified it doesn’t just mean a lot to this squad, but to lots of people back home and perhaps kids who want to play cricket in the future. We’re still elated.” 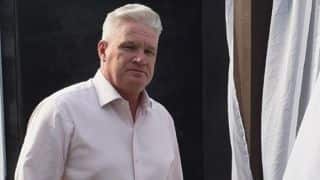