Philander's selection alongside Hashim Amla, Imran Tahir and JP Duminy increased to four the number of 'players of colour'.

Philander was called into the South African XI in place of Abbott for last week’s match against the Black Caps in Auckland, which the Proteas lost by four wickets. Philander had missed four of South Africa’s seven World Cup matches before the semi-finals after he picked up a hamstring niggle during the pool stages. Top 10 batsmen in ICC Cricket World Cup 2015

His selection alongside Hashim Amla, Imran Tahir and JP Duminy increased to four the number of ‘players of colour’ — a term which encompasses black Africans, mixed-race people and those of Asian descent — the same number required under a quota system for the national team before it was scrapped in 2007, reports cricket.com.au on Monday.Top 10 fielders in ICC Cricket World Cup 2015

A report in the Sunday Times quoted a “well-placed source” as saying that Philander’s selection came at the direction of the CSA — a claim that has been denied by the board’s chief executive Haroon Lorgat. Top 10 wicketkeepers in ICC Cricket World Cup 2015

“There was and is no political interference in our selections. We have a selection panel that includes the coach and independent members, and this panel selected all the teams at the World Cup in the same way that they did before the World Cup,” Lorgat said.

CSA president Chris Nenzani added: “I have not in the past interfered with the selection of the team and I do not intend to do so in the future. We have always emphasised that national team selection must be on merit.”

Philander took 0-52 from eight overs against the Black Caps and left the field during the run chase due to injury. After arriving back in South Africa over the weekend, Proteas coach Russell Domingo defended Philander’s selection ahead of Abbott, who took nine wickets in four World Cup matches at an average of 14.

“Vernon was fully fit. He had been through all the rehab and fitness tests. He has been a champion bowler for a long period of time in all formats,” Domingo was quoted as saying by cricket.com.au. “In New Zealand we always felt that the wicket could offer the seamers a little bit and when there is something in the wickets, Vernon is one of the best exponents of that and that’s why we went with that.”

Quota-based selections have long been a topic of debate in South African sport and the Philander case comes after CSA increased racial quotas in domestic cricket. Franchises are now required to have six players of colour, including three black Africans, in their sides.

The Proteas have not had a racial quota since the system of including four players of colour in the side was scrapped in 2007. The Sunday Times‘ source said the Proteas players were “fuming” over Philander’s selection and captain AB de Villiers was reluctant to play in the match over the issue. ICC Cricket World Cup 2015: Complete Coverage 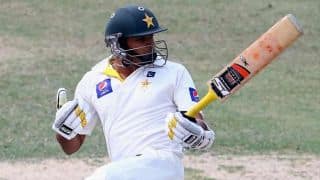