India will kick off their home season as they take on the Quinton de Kock-led South Africa in a three-match T20I series.

Ahead of the T20I series opener against South Africa in Dharamsala, the Indian cricket team skipper Virat Kohli on Sunday said that it is good to be back home after a very hectic last year playing away from home.

“Last year was very hectic. Very tough to stay away from home for so long. But you take that in your stride because of the way the team played. Very happy with the way things went on the road. But it is always great to be back home,” Kohli told bcci.tv in an interview.

“The home season always has a different kind of grounding feeling. Feeling of belonging, feeling of connectivity. So, we are very happy and excited for the home season,” added Kohli.

India, who are yet to win a World T20 title since winning the same in the inaugural edition of the tournament in 2007, are scheduled to play around 30 games in the shortest format of the game ahead of the next year’s mega event.

Keeping this in mind, Kohli made it clear that the players, who will be getting a chance to play for the team before the 2020 T20I World Cup, must prove their credentials as the team management zeroes in on the the players for the ICC event.

“We are very clear. It is not that anyone will get 30 chances. Even when I came in the team, I didn’t think I will get 15-20 games and I knew I will mostly get chances in three to five games and I have to prove myself. One will get suppose five chances and he will have to prove himself. That is the level we are playing at. As the team management has that mindset, the individual should also have the same,” Kohli said.

“It is a delicate balance to strike but as we have 30 games before it (World Cup), so we have to figure out how much time each individual gets,” added Kohli.

India, who beat West Indies in their last T20I series, will take on South Africa as the home season begins with a T20I in Dharamsala on Sunday. When asked whether India’s roadmap for the next year’s T2O World Cup begins in Dharamsala, Kohli stated that the team is focused on T20 World Cup as well as the World Test Championship.

“We feel both the T20Is and the Test championship are in our focus as both of them are milestones and that is why youngsters are being pushed in from time to time as it is important to settle the team combination because we have to figure out the guys who will take the team forward,” concluded Kohli. 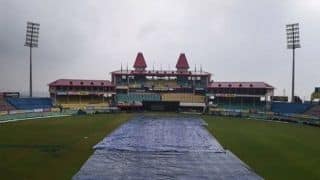