The Karnataka government has announced a reward of Rs 1 crore for the winning state team.

Karnataka government on Sunday announced Rs 1 crore reward to the state’s cricket team, which won the Ranji Trophy 2013-14, beating Maharashtra by seven wickets in the final at Hyderabad earlier in the day.

Announcing the cash prize, Chief Minister Siddaramaiah said the historic win after 15 years would boost the morale of the players and encourage them to ensure more victories.

“I congratulate the state team for lifting the prestigious trophy for the seventh time and wish them to remain on winning spree in other tournaments,” he said in a statement in Bangalore.

With this win, Karnataka, who last won the trophy in 1998-99, are joint second with Delhi while Mumbai top the list with 40 wins so far.

The award will be given to the team at a function to be held here later this month. 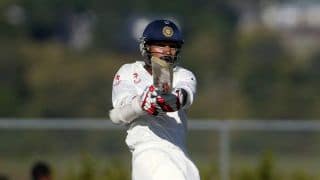