Bravo last played a Test in December 2010 against Sri Lanka where he had scored 68.

West Indies star allrounder Dwayne Bravo has called time on his international career on Thursday. Bravo, who made his ODI debut in April 2004 against England at Georgetown, missed out on the tour of India after his name was absent from the list of 25 players revealed by Cricket West Indies (CWI) to obtain visas for the ODI leg of the ongoing tour.

In the T20 format, a specialist and experienced campaigner, Bravo has played 66 matches, he has smashed 1142 runs at an average of 24.29 and has claimed 52 wickets. His best bowling figures in T20Is are 4/28.

Bravo last played a Test in December 2010 against Sri Lanka where he had scored 68 in a drawn match after rain interrupted play. He has played 40 Tests and has scored 2200 runs with 13 half centuries and three centuries to his name. He has claimed 86 wickets, including his best bowling figures of six for 55. 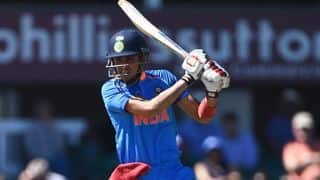