South African pace ace Dale Steyn is undoubtedly the greatest pace bowler of recent times. Not only can he swing the ball, but he gets it to move at a lethal pace. His bowling averages of 22.48 in Tests, 25.56 in One-Day Internationals (ODIs) and 15.98 in Twenty20 Internationals (T20Is) is a testimony to his skills. [Also Read: Dale Steyn and colleagues celebrate their win with a ‘taxi selfie’]

In the first One-Day International (ODI) between New Zealand and South Africa at Centurion on August 19, 2005, Steyn cleaned up Mitchell McClenaghan to reduce New Zealand to 283 for nine at the end of 48th over.

He simply murdered the stump. It was a cross seamed delivery bowled at a fuller length at almost 142 kmph. McClenaghan seems to be motivated from his colleague Grant Elliott’s penultimate ball six off the same bowler in the World Cup semi-final at Auckland. He made room and tried to play an ambitious shot and his off-stump broken into two. In the close fought contest, South Africa sealed it by 20 runs and Steyn ended with figures of 50 for two from his nine overs. 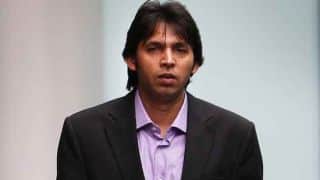