VIDEO: David Warner threat looms for Delhi at the Kotla

VIDEO: David Warner threat looms for Delhi at the Kotla

Game 16 of the competition pits hosts Delhi Capitals against Sunrisers Hyderabad on Thursday.

After losing seven wickets for eight runs in their last match against Punjab, hosts Delhi Capitals meet Sunrisers Hyderabad in game 16 of IPL 2019 on Thursday.

Both teams have four points but Hyderabad have played one game fewer. Boosted by the form of David Warner and Jonny Bairstow, the franchise will hope to add a third win over Delhi who have had a stumbling campaign so far.

Despite boasting a strong batting lineup, Delhi have not been consistent. Against a very good SRH bowling attack, can the hosts regroup? 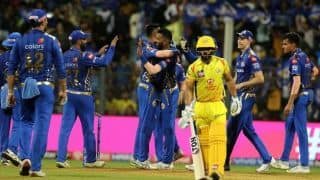