Dhoni and his wife Sakshi have taken every opportunity to display their love for their daughter on social media sites on a regular basis.

MS Dhoni is a loving father and his affection towards daughter Ziva is well known. Dhoni and his wife Sakshi have taken every opportunity to display their love for their daughter on social media sites on a regular basis. The couple were in Mussoorie, Uttarakhand to celebrate Ziva’s second birthday on February 6. During the break, the doting father ensured he spent valuable time with his little princess. Dhoni posted a video that shows him crawling on the ground behind Ziva.

Is it a military crawl? Dhoni’s love for armed forces is well known. In 2011, the Indian Territorial Army conferred the honorary rank of Lieutenant Colonel to him.  He was conferred the honour for outstanding contribution in the field of sports and his commitment to the military on various occasions was seen. Recently he underwent a two-week initial training with the elite Para regiment of the force in Agra.

It seems daddy Dhoni is playing the army game with his beloved Ziva. The doting father has retired from Tests and therefore has ample amount of time to spend with his family. Ziva was born in 2015 when Dhoni was in Australia preparing for the ICC World Cup 2015, a tournament where he was leading the side.

India’s campaign ended in the semi-final after a defeat in the hands of Australia. Dhoni met his daughter for the first time almost after two months. The former captain has surely made up for the lost time.

Dhoni will be back in Indian colours during the Champions Trophy in June but before that he will don the Rising Pune Supergiants colours in the IPL 2017 that is set to start from April 5. 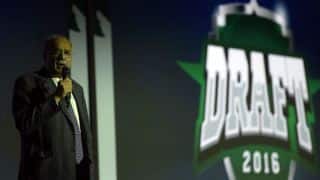