Anyway, what we got to see was perhaps the first video of India’s most beloved captain on internet

Indian captain Mahendra Singh Dhoni’s daughter Ziva on Thursday made her debut of sorts on the big screen (okay, we were joking). Dhoni’s wife Sakshi posted a video of Thursday afternoon on Twitter wherein their daughter Ziva was seen watching the hit rap song ‘Hit the Quan’ on a laptop. For those unaware, the song and dance on ‘Hit The Quan’ has become a hit among the residents of Memphis as they have extended their support to the rapper Rich Homie Quan.

The rapper has been charged in a gang rape case in Memphis, and the people from the city have been creating videos and putting them on the social media with the tags ‘#HitTheQuanChallenge’. Sakshi, when she tweeted on Thursday, we are sure, will not be having much idea about it.

Anyway, what we got to see was perhaps the first video of India’s most beloved captain on internet. Dhoni was involved in India’s defence of the World Cup title before the ICC Cricket World Cup 2015 in Australia and New Zealand, and unfortunately had to wait till his team was knocked out of the tournament by the co-hosts and eventual champions Australia.

But ever since Dhoni returned from India’s marathon tour (four-Test Border-Gavaskar Trophy versus Australia and a triangular series with England as the third team) was seen with his daughter ample amount of times. And Ziva was alongside MS Dhoni wherever he travelled throughout the country during the 2015 edition of Indian Premier League (IPL). 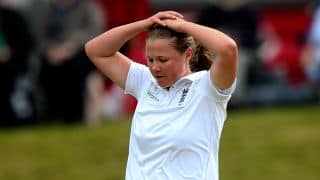