Match highlights from game four of the Super Four stage of the Asia Cup, in which Bangladesh narrowly beat Afghanistan.

Bangladesh defeated Afghanistan for the first time in the Asia Cup in three matches and kept their hopes of a place in the final alive.

Against Pakistan, it was the experience of Shoaib Malik that denied Afghanistan a much deserved win. On Sunday, they were undone by the wily Mustafizur Rahman, who defended eight runs in the final over. Mustafizur gave away just four runs, as Bangladesh pipped Afghanistan by three runs in match four of the Super Four of the 2018 Asia Cup in Abu Dhabi.

Veteran Mohammad Nabi took his team close scoring 38 off 28, while Samiullah Shenwari made 23 off 19, but couldn t figure out Mustafizur s variations in the final over. 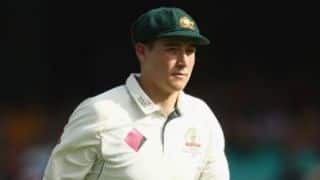