Oman defeated Namibia by five in the fourth qualification playoff in the ICC World Twenty20 Qualifier 2015.

Oman’s cricket team captain Sultan Ahmed on Thursday dedicated the win that got their side to clinch a spot at the ICC World T20 2016 to his mother, who had died last week, and to the father of a teammate, Khawar Ali, who also passed away recently, after the last playoff game in the ICC World Twenty20 Qualifier 2015. Oman trumped a strong-looking Namibia by five wickets, and six balls to spare, chasing 149, in Malahide, Dublin. The result confirms the following are the six teams to participate in next year’s event alongside 10 member-nations: Ireland, Scotland, Hong Kong, Netherlands, Afghanistan and Oman. UPDATES: Namibia vs Oman, 4th qualifying playoff, ICC World Twenty20 Qualifier 2015

Oman’s victory was based on a tight bowling performance at the death of Namibia’s innings, helped by wickets from their strike-bowler Munis Ansari. Namibia couldn’t restrict the flow of singles, and weren’t too threatening with the ball, which the batting side exploited well. Oman have proved strong on their day in the tournament, amid inconsistency that their coach Derek Pringle also pointed out on air during the match. They have defeated two strong teams, Afghanistan and Netherlands, en route to the qualification playoffs.

Zeeshan Siddiqui was the lynchpin of the chase, with a well-paced, unbeaten 51. He was ensuring the necessary odd boundary was hit amid the singles and therefore that the required run-rate was always in control. In the 18th over, despite a wicket falling, he decided to kill the contest with a four and a six, to keep his side from taking the match into the last over. The target was got to calmly, with five singles to various parts of the ground and then slap through mid-off for a one-bounce four which got the winning runs.

Zeeshan was the Man of the Match; his smiles while talking to his interviewer Pommie Mbangwa after the match, with the Oman flag draped around him, revealed his mood and that of the team. Their team spirit was mentioned to be strong by Pringle, and they gave a demonstration of it before taking the field at the start of the match: they prayed together briefly, and shouted a word of motivation and then stepped out. 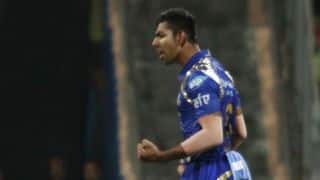