Video: Players to watch out from ICC World XI vs West Indies T20I

Video: Players to watch out from ICC World XI vs West Indies T20I

The West Indies are all set to lock horns with the ICC World XI at the Lord’s in a T20I charity match to help raise funds for the refurbishment of five cricket stadiums in the Caribbean. The stadiums were damaged by Hurricanes Irma and Maria in 2017. In absence of Eoin Morgan, Shahid Afridi will lead the World XI side. Whereas, the West Indies would be captained by Carlos Braithwaite.

The World XI team includes players from Asia, New Zealand and England. Many big players pulled off from the side for various reasons but the team still seems star studded. Players like Dinesh Karthik, Evin Lewis and Rashid Khan will look to carry their good form from IPL. Sandeep Lamichhane would be a player to look for in the match. With the big names like Chris Gayle, Lewis and Andre Russell we might expect a high-scoring match. 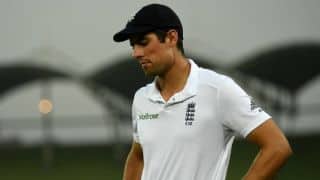 Test future are on the line, Alastair Cook warns ahead of 2nd Test against Pakistan All teams touring India to play a practice match against Afghanistan, declares BCCI