Hadlee paid tribute to Crowe in a special video, which covers Crowe’s cricket journey, ends with a thank you message from the legendary fast bowler.

New Zealand and World cricket lost one of its finest gems when Martin Crowe passed away on Thursday after a long battle with cancer. The former New Zealand captain, who almost single-handedly took his team to the World Cup title in 1992, was suffering from a very rare sub-type of lymphoma, one of the more common types of cancer.

The entire cricket family came together and mourned on the death of one of its greatest sons. Closer home, another New Zealand legend Richard Hadlee also had his thoughts and prayers with the family of his ‘great’ friend and team-mate. The word great is operative here, which Hadlee used to describe the class of Crowe.

Both the legends, who have made enormous contribution to New Zealand cricket, and the world cricket in general, played together for eight long years before Hadlee called it a day in 1990. Crowe further represented New Zealand for five more years before his deteriorating right knee forced him to retire from the game prematurely. 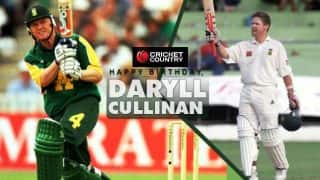