VIDEO: Roston Chase smashes his maiden Test ton to save the day for West Indies

VIDEO: Roston Chase smashes his maiden Test ton to save the day for West Indies

Roston Chase smashed 15 boundaries and a maximum for his match-saving unbeaten 137.

Roston Chase engineered West Indies’ fight back and saved the day for his side with a determined knock of an unbeaten 137. Chase played with diligence and was not only biding his time at the crease but also scoring runs. His approach was not too defensive, which was probably the key to his success.  Also Read: Twitterati hail Roston Chase, Jermaine Blackwood’s resistance against pumped-up Indian attack

Chase smashed 15 boundaries and a maximum for his 137. This is the first time in 18 years that a Test match has ended in a draw at Sabina Park. Chase also took a fifer with the ball and scripted his name in the history of cricket by plundering a much-needed ton. He stitched three crucial partnerships with Jermaine Blackwood, Shane Dowrich and Jason Holder to get the job done for his side. Also Read: Twitter goes berserk as West Indies save the 2nd Test against India

Many cricketing greats and pundits spoke highly about Chase’s knock as West Indies can now eye to make a comeback in the four-match Test series. It was only Chase’s second Test and this will bolster his confidence and further help the resurgence of West Indies side. The last time a West Indies player scored a century and took a fifer in the same Test before Roston Chase was Garry Sobers in 1966.

Take a look at the video where Chase takes on the Indian bowlers here: 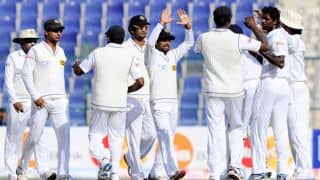 One of Jason Holder’s “best days in Test cricket”