Sachin Tendulkar termed Phogat an inspiration for all the Indians and asked everybody to for their support on her road to the Olympics.

Indian cricketing legend of the modern game Sachin Tendulkar on Friday called for the support of Indian female wrestler Vinesh Phogat, who is on her way to the Olympics 2016 to be held in Rio de Janerio in Brazil in July. Sachin sent out a video in his official Facebook page, saying that wrestling is a game of power, and power is not only limited to the men, but is also equally possessed by the women. He termed Phogat an inspiration for all the Indians and asked everybody to for their support on her road to the Olympics, where she could represent India and possibly challenge for a medal. Sachin Tendulkar wishes Leander Paes on his birthday

Sachin Tendulkar will also tune in from abroad by video link to help choose India’s new coach after he was handed the task alongside fellow batting greats Sourav Ganguly and VVS Laxman. Tendulkar, Ganguly and Laxman, dubbed the “holy trinity” by Indian media, together with senior official Sanjay Jagdale, will get to work after the flood of 57 applications was whittled down to 21, a statement said on Thursday. 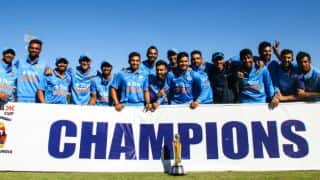