Substitute fielder Vijay Shankar too chipped in with a classic display of fielding at the square leg boundary to get rid of Dwayne Bravo.

GL lost some early wickets and Aaron Finch along with Dwayne Bravo was trying to do some repair work out in the middle. They were 79 for the loss of 4 wickets after 14 overs when Bravo decided to break the shackles and get some quick runs. And in an attempt to do so, he attempted a big hit on the very first delivery of the 15th over by Barinder Sran. The ball didn’t get the middle of the bat as a result of which it was falling short of the square leg boundary. Video: Jason Holder gives Arijit Singh a run for his money; sings ‘Meri Aashiqui Ab Tum Hi Ho’

Shankar covered some good ground and dived towards his left to cup a spectacular catch at the boundary, he also ensured he didn’t touch the boundary rope when he slided. The catch was judged out by the third umpire and Bravo had to walk back. Undoubtedly one of the best catches of the tournament. The video was posted on IPL’s official Twitter account and wrote, “Vijay Shankar grabs a stunner to get rid of @DJBravo47 #SRHvGL #VIVOIPL” 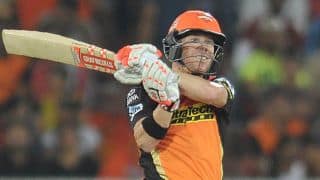