While scoring runs in bulk in the third Test against Sri Lanka, Indian cricketers made sure they had fun to the fullest. The spectators were delighted to see captain Virat Kohli join Murali Vijay in a special dab celebration, as the later put up his consecutive hundred.

Vijay, on reaching the three-figure mark, started with a dance, and when Kohli approached to hug him, he asked him to do a special celebration together. Skipper readily agreed to it, giving the fans a lighthearted moment. The celebration, however, reminded everyone of Paul Pogba’s dab and Antoine Griezmann’s dance.

Murali Vijay, who had a wrist injury earlier this year, made a comeback to Indian team in the previous Test after Shikhar Dhawan ruled himself out citing personal reasons. Vijay utilised the chance to the fullest, scoring the tenth ton of his Test career and helped India build a strong foundation, which was later converted into a mammoth of 610 for 6 (declared). India posted their biggest ever victory on Sri Lanka in the match, by an innings and 239 runs. 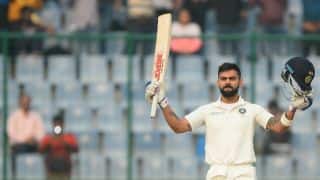