VIDEO: When a fiery Shoaib Akhtar bowled Pakistan to the World Cup Final

VIDEO: When a fiery Shoaib Akhtar bowled Pakistan to the World Cup Final

It had been a dream year for Shoaib Akhtar thus far and earlier in the tournament, he had broken the 100 mph mark. At the grand stage of World Cup semi-final, he was eager to prove a point.

Shoaib Akhtar was a showman, who loved the grandest of stages. It was the semi-final of ICC World Cup 1999 at Old Trafford, Manchester and the Pakistani speedster was keen to prove a point. It seemed like a good batting surface and New Zealand’s Stephen Fleming elected to bat.

It had been a dream year for Akhtar thus far and earlier in the tournament, he had broken the 100 mph mark. All Akhtar did was bowl fast; he sent down bolts from one end, while Wasim Akram and other bowlers set it up from the other. ALSO READ: Shoaib Akhtar: 14 interesting facts about the maverick who terrorised batsmen, teammates and administrators

In his first spell, he knocked out Nathan Astle in his third over. It was just too quick that pitched on length and crashed on to the stumps via the gate between bat and pad. A sight that would have delighted any pacer.

New Zealand were going strong in the 34th over. They had 152 on board with skipper Fleming and hero of the Super Six game against Australia, Roger Twose having added 94 for the fourth wicket. What happened next was out of Fleming’s expectation. Akhtar in his second spell sent down toe-crusher at 92 mph, which uprooted his off-stump.

It was a major psychological blow for the Kiwis. New Zealand had crawled to 209 for 5 in the 46th over with Chris Harris and Chris Cairns at the crease. Both carried strong reputation and Kiwis expected the two Chrises to bail them out. READ MORE: Dropping the World Cup 1999? Here is Herschelle Gibbs’ side of the story; still thinks ‘it was Out!’

Now, Harris expected a thunderbolt but received a well-disguised slower one to dismantle the batsman’s stumps.

On a good batting surface, 241 was not going to be enough. Pakistan cruised to a nine-wicket win, courtesy a 194-run opening stand. Saeed Anwar starred with 113 not out but it was Akhtar, who won the Man-of-the-Match.

Pakistan became the first team to enter the grand finale and the following day, the next semi-final between Australia and South Africa went on to be one of the greatest matches in cricket history. 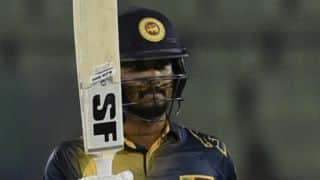 Cricket fraternity reacts to Euro 2016 match between England and Wales