Yasir, who was deployed at point dived to his left and pulled off a stunning catch.

The ongoing Test series between England and Pakistan has witnessed many glorious and mind-boggling moments. It is certainly one of the most memorable series in the history of England-Pakistan cricket. Each day is packed with action. It started at Lord’s and now the third Test is in progress at Edgbaston and Day 4 saw a terrific catch being pulled off by Yasir Shah at point.

Winning the toss, Pakistan captain Misbah-ul-Haq opted to bowl first and bundled out England for 297. In return, Pakistan responded with fire and gained a lead of 103 runs. Azhar Ali top scored the board with 139 runs. The second innings turned out to be a tough one for the Pakistani bowlers as they weren’t able to pick a single wicket on day three. English openers Alastair Cook and Alex Hales added 120 runs on the board and gave no room for error. ALSO READ: Poll: Herath, Ashwin, Shakib, Lyon, Jadeja or Yasir — who is the best spinner in Test cricket?

On Day 4, it was clear that Pakistan had to chip early wickets in order to make a comeback. Sohail Khan took charge and got the wicket of Cook with the help of Yasir Shah. On the first ball of the 39th over, Cook got a thick edge off a back of a length delivery. The ball travelled towards point in the air at a good speed and needed some athleticism to be cupped. Yasir, who was deployed at point dived to his left and pulled off a stunning catch. 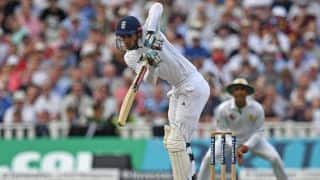