Chasing the imposing total, Tamil Nadu were bowled out for 209 in 43.5 overs.

Coming on to bat a No. 4, Pandey scored an attacking 101 off just 74 balls with the help of 10 fours and three sixes, while Australia-bound K L Rahul hit a sedate half-century to enable Karnataka post 313 for six in their alloted 50 overs.

Rahul, who was today picked in India‘s Test squad for Australia, justified his selection by scoring 67 off 94 balls during which he struck six boundaries and two sixes.

Chasing the imposing total, Tamil Nadu were bowled out for 209 in 43.5 overs with pacer Mithun (4/38) doing bulk of the damage, and he was ably assisted by left-arm spinner Abrar Kazi (3/14). 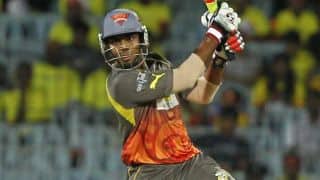