Pawan Suyal took 3 for 14, while Pawan Negi and Navdeep Saini took two wickets each to dismiss Assam for 100.

New Delhi: Delhi bulldozed Tripura by eight wickets in a thoroughly one-sided Group C encounter of the Vijay Hazare Trophy 2015-16 at the Feroz Shah Kotla in Delhi on Monday. This is Delhi’s third win in four matches and the hosts are favourites to seal one of the two quarter-final spots up for grabs from this group. Currently, Delhi are second behind Maharashtra in the Group C table, with 12 points from 4 games. Maharashtra also have 12 points but have played a match less. The bowlers led by left-arm pacer Pawan Suyal (3 for 14 in 10 overs) and Navdeep Saini (2 for 28 in 9 overs) skittled out Tripura for 100 in 39.3 overs with former UP batsman Parvinder Singh top-scoring with 20. Left-arm spinners Manan Sharma (2 for 24) and Pawan Negi (2 for 2) also did their bit. FULL UPDATES: Delhi vs Tripura, Vijay Hazare Trophy 2015-16, Group C

Delhi earlier beat Baroda and Odisha by five wickets and 31 runs respectively, while losing to Vidarbha by 18 runs in a closely fought game. Delhi however, failed to progress beyond the group stage in the ongoing Ranji Trophy 2015-16, where they finished a point behind Assam to finish fourth in Group A of the points table. 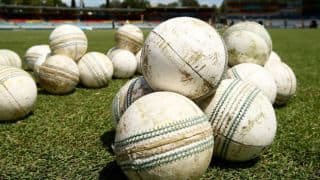