Ganga Sridhar Raju played an anchorman knock that had other batsmen support him ably, as Tamil Nadu won the tie in an emphatic manner by 5 wickets over Gujarat to qualify for the semi-finals of Vijay Hazare Trophy 2016-17.

Chasing 212 runs to win, Tamil Nadu displayed a clinical show with the bat against Gujarat at the Airforce Complex ground, Palam in New Delhi in ongoing Vijay Hazare Trophy 2016-17. This was also the second match of the quarter-finals round, that saw Tamil Nadu batsman Ganga Sridhar Raju steer his side into the semi-finals. Raju played an anchorman knock that had other batsmen support him ably, as Tamil Nadu won the tie in an emphatic manner by 5 wickets. Tamil Nadu openers Kaushik Gandhi and Raju rocketed their way to a blistering start, adding 62 runs in the first 10 over. Krunal Pandya’s all-round show helps BAR thrash KAR by 7 wickets, qualify for semi-finals

Raju was the chief destroyer amongst the both. Gandhi fell for 18 to Akshar Patel. No.3 batsman Baba Aparajith and Raju went on their merry ways. Raj, looked in prime touch and went on to achieve his half-century. The pair added 63 runs for the second wicket, before Rujul Bhatt cleaned up Aparajith for 34. New man in Dinesh Karthik accompanied Raju well. Raju nearly got to his hundred, departing after making 85. He became Priyank Panchal’s first scalp. Star with the ball, Vijay Shankar joined Karthik in the middle, but Karthik soon joined Raju back in the dressing room, making just 21 off 23 deliveries. Gujarat sniffed a chance at victory after Rohit Dahiya grabbed Baba Indrajith for 1.

Shankar and Mohammed ensured there were no hiccups for Tamil Nadu, guiding them to a comfortable victory by 5 wickets. Mohammed used his long handle to good effect remaining unbeaten on 35, while Shankar added 11 runs.

With this win, Tamil Nadu moved on into the semi-finals round of the Vijay Hazare Trophy 2016-17.

Earlier, Gujarat scraped through their innings to 211 runs thanks to Rujul Bhatt and Samit Gohil, who, opening the innings, played a sturdy knock of 39 runs from 57 balls which saw only 2 fours and a solitary six. Rahil Shah provided Tamil Nadu early inroads, getting Panchal and Bhargav Merai for 14 & 7 runs respectively. It was then that Bhatt, coming in at No.4, stabilised the innings. Aparajith struck soon, nabbing Gohil for 39. It was downhill for Gujarat from there on. Shankar grabbed 2 quick wickets in the form of Het and Chirag Gandhi.

Bhatt continued his resistance making a well deserved half-century. He was ably supported by Akshar, who added 18 off 27 before he was caught behind off Washington Sundar. Gujarat lost their seventh wicket as Shankar grabbed his third; Jesal Karai went for 12. Rohit Dahiya added just 9 runs before he became Sai Kishore’s first scalp. Kishore struck again getting Chintan Gaja for 9. It was only Bhatt, who kept the flow of runs ensuring Gujarat got past the 200-run mark. Bhatt remained unbeaten on 83 runs, after final wicket fell for 211; Ishwar Chaudhary getting run out for 0.

Shankar was the best bowler for Tamil Nadu, picking 3 for 48, while Shah and Kishore scalped 2 each. 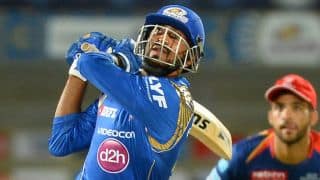