An unbeaten 59 by opener Vikash Ranjan ensured Bihar seal the win in 15.4 overs.

Bihar thrashed Mizoram by nine wickets in a Plate group match in Round 12 of the Vijay Hazare 2018-19 on Monday to enter the quarter-finals on domestic return after 18 years.

In January this year, the Supreme Court had ordered the BCCI to allow Bihar to play the Ranji Trophy and other domestic tournaments. Bihar last played the Ranji Trophy Plate group in the 2003-04 season.

Opting to bat, Mizoram were off to a positive start with opener Akhil Rajput scoring a 65-ball 43. However, Bihar captain Keshar Kumar s left-arm spin spoiled the party for Rajut, who was cleaned up in the 22nd over. Rajput s dismissal led to a batting collapse with no other batsmen, besides his opening partner Michael Lalremkima (18) registering double digit scores. Five batsmen departed for ducks that added insult to injury. Mizoram were bowled out for 83 in 27.2 overs with Kumar returning with 4/21, while the other left-arm spinner Ashutosh Aman claimed three wickets in his four over and went for just two runs.

An unbeaten 59 by opener Vikash Ranjan ensured Bihar seal the win in 15.4 overs and edge past second-placed Uttarakhand to reach the knockouts in a memorable victory. 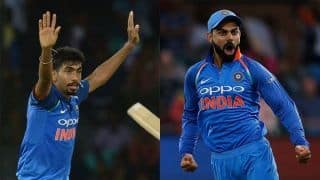