In the final day of the Elite A and B league matches, Baroda lost out on qualification for the quarter-finals of the 2018-19 Vijay Hazare Trophy losing to Maharashtra. The win ensured Maharashtra to the next round alongside Mumbai from the group.

Opting to first, could only manage 206 for 8 in their 50 overs at the KSCA Cricket Ground, Alur which was comfortably chased down by Maharashtra with five wickets in hand 33 balls to spare.

Yusuf Pathan then hung and batted with the lower-order scoring an unbeaten 64 off 66. For Maharashtra, pacer Samad Fallah claimed 3 for 21 while Bachhav returned 3 for 39.

In reply, Maharashtra too had a poor start losing their openers – Swapnil Gugale (3) and Rituraj Gaikwad (9) – early to to pacer Atit Sheth. However, Ankit Bawne and Rohit Motwani steadied the innings with a stand of 56 runs for the the third wicket.

Bawne was picked up by Swapnil Singh for 25, but Motwani forged a match-winning 90-run stand with Naushad Shaikh (76*). Motwani was taken by Pandya for 50, but Shaikh anchored the chase with the help of Rahul Tripathi (13) and Pranshant Kore (15*).

Maharashtra finish the league stage with 26 points and qualified for the quarter-finals, while Baroda, with 20 points, barely miss out.

At the KSCA Cricket (3) Ground, Vidharbha finished their Vijay Hazare campaign with a win, beating Goa by one run in a close finish.

After opting to bat first, Vidarbha were buoyed by opener Faiz Fazal s 49, Atharwa Taide s 48 and Ganesh Sathish s 45 to finish with 218. For Goa, Darshan Misal picked up 4 for 52.

In reply, Goa lost their openers early before VS Kahlon (35) and Amit Verma (45) got Goa back on track. Vidarbha though managed to stay ahead with regular strikes. SS Prabhudessai in association with and SS Kauthankar (32) pushed Goa to Vidarbha s total but with the wickets of Prabhudessai and Kauthakar in a span of three runs handed the advantage back to Vidarbha.

In the second non-consequential match of the Group Punjab claimed their fourth win to finish at fourth in the points table beating Karnataka by six wickets.

After being put in to bat, Karnataka s top-order fired with openers Ravikumar Samarth (54) and BR Sharath (70) put on 115 for the opening wicket. Karun Nair made 28 while Manish Pandey added 67. But the lower-order faltered with only Shreyas Gopal managing double figures (35) as Punjab bowled out Karnataka for 296 at the M Chinnaswamy Stadium, Bengaluru.

The target did not really prove much of a challenge for Punjab as the top-order setup an easy win with Anmolpreet Singh (138) and Shubman Gill (77) adding 198 runs in 31/1 overs. Yuvraj Singh and Mandeep Singh scored 38 and 30 respectively, as Punjab chased down the total with six wickets in hand and seven balls to spare. 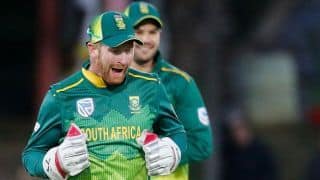 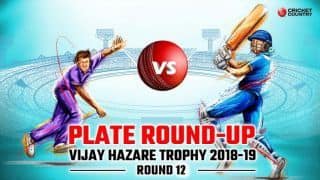