Karnataka claimed their second win of the campaign in in seven matches beating Himachal Pradesh by 35 runs (VJD method). In the rain affected match at the M Chinnaswamy Stadium, Bengaluru – the start was delayed for long while.

In reply, further rain meant the Himachal innings was further shortened and target was revised to 198 in 32 overs, but Himachal failed to get going.

Only skipper Prashant Chopra added any substantial scoring 67 off 45 with the next best being 26 from fellow opener Ankush Bains. After being 58 for 0, Himachal lost their 10 wickets for just 104 runs.

Medium pacer T Pradeep claimed 4 for 35 while off spinner Krishnappa Gowtham picked 4 for 26.

At the KSCA Cricket Ground, Alur – again rain affected – Vidarbha claimed a 15-run win via the VJD method over Railways.

After being put into bat, Railways, searching for their first win of the tournament were 2 for 19 after pacers Rajneesh Gurbani and Yash Thakur claimed openers Karan Sharma and one down batsman Mrunal Devdhar. However, skipper Saurabh Wakaskar (57) and Manish Rao (30) put on 72 for the third wicket. But the duo departed in the span of two runs opening the floodgates for Vidarbha.

In reply, Vidarbha lost skipper Faiz Fazal for 14 and one down batsman Atharwa Taide for 21. But 41 by Akshay Kolhar kept Vidharbha in front. Ganesh Sathish (53*) and Akshay Wadkar (49*) set their team on course for a win, before rain halted paly. No further paly was possible and when VJD method was employed for the result, Vidharbha (176/3) were 15 runs ahead of the revised target of 162.

The third match between the table-toppers Mumbai and second-placed Maharashtra was washed out without a ball being bowled and the points were shared. While Mumbai extended their lead with 28 points, Maharashtra with 22 now find themselves in equal to two other teams from Elite B. Top five teams from Elite A and B combined will qualify for the quarter-finals of the Vijay Hazare Trophy 2018-19. 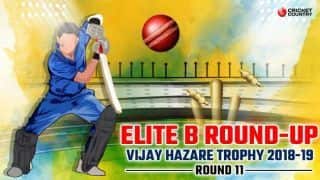