A round-up of the Elite Group B matches on day three of the 2018-19 Vijay Hazare Trophy.

A round-up of the Elite Group B matches on day three of the 2018-19 Vijay Hazare Trophy.

At Palam, four wickets to Akshay Chandra and three to Jalaj Saxena set up Kerala s six-wicket win over Odisha on Friday. Chandran s 4/29 and Jalaj Saxena s 3/24 combined to bowl out Odisha for 117 in 34.4 overs, with three batsmen dismissed in the twenties across a sorry scorecard. Jalaj Saxena added to a shaky start by running out the opener Anurag Sarangi in the second over to leave Odisha at 6/2, and then Chandran bowled skipper Govinda Poddar for 22 to trigger the collapse. A scoreline of 54/2 turned into 78/6 before the lower order managed to get it to 117.

At the Feroz Shah Kotla, hosts Delhi picked up their second win in as many days with a VJD Method victory by six wickets over Hyderabad. Delhi were 178/4 in 30.4 overs when an unseasonal shower hit Delhi, and that was deemed to be well above the asking rate. Nitish Ran was batting on 91 off 87 balls at the time, after skipper Gautam Gambhir was out for 41.

Manan Sharma was the most successful bowler for Delhi with 4/32 from nine overs, his wickets helping run through the middle order. A shaky start for Hyderabad was followed by Sumanth Kolla making 30 and Bavanaka Sandeep 51, but once again there was a collapse. Manan s dismissal of Kolla saw Hyderabad fall from 94/3 to 114/6, and only an entertaining 36 not out off 24 balls from fast bowler Mohammed Siraj got the score past 200. Subodh Bhati, fresh from a maiden List A five-wicket haul on Thursday, finished off the innings in 47.4 overs when he bowled No 11 Ravi Kiran.

Dismissing Uttar Pradesh for 250 in 49.2 overs with Jatin Saxena claiming 4/56 was key to this success which kept Chhattisgarh at second in the group. Well placed at 179/2, UP lost skipper Suresh Raina for 1 in the 34th over and could only add 71 runs from there. Three of Jatin Saxena s wickets came during this collapse, two in the 39th over and the final in the 43rd. The openers Shivam Chaudhary (36 off 41) and Upendra Yadav (85 off 99) and No 3 Rinku Singh (58 off 69) combining for nearly three-fourths of UP s total.

Chhattisgarh had three half-centurions during their chase of 251 – the opener Avinash Dhaliwal (50), Amandeep Khare (78*) and Vishal Kushwah (52). The rest struggled, as highlighted by ducks to Harpreet Bhatia and Jatin Saxena. 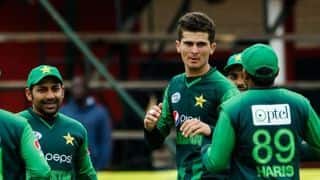 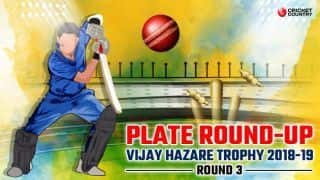