Jharkhand, with their seventh win of Elite C topped the group with a 25-run win over third-placed Services, defending a total of 290 at the TI Cycles Ground, Murugappa, Chennai. Jharkhand had already sealed their place in the quarter-finals along with Haryana from the group.

After being put in to bat, Jharkhand were in a spot of bother at 41/3 after spinner Nitin Tanwar had claimed both the openers, Anand Singh (16) and Ishan Kishan (21), before pacer Diwesh Pathania cleaned up Virat Singh for 1.

However, Saurabh Tiwary (65) and Kumar Deobrat (88) got together for a stand of 130-run for the fourth wicket to bring Jharkhand back on track. Then, Ankul Roy s 58 off 43 balls late in the innings pushed Jharkhand s total to 290.

In reply, Services were buoyed by Rahul Singh s 75 and skipper Rajat Paliwal s 68. However, Services lost the plot losing their last five wickets for just 29 runs. Off-spinner Roy picked four of those five wickets to finish with 4 for 53 as Services were all out for 265.

At the MA Chidambaram Stadium, Chepauk, Gujarat ended their campaign with a win, beating Bengal by 41 runs.

In reply, Bengal never got going. Openers Abhimanyu Easwaran and Vivek Singh made 22 and 10, respectively, while one down Sreevats Goswami scored 21.

Manoj Tiwary (34) and Sudip Chatterjee (36) tried to rebuild, but Gujarat bowlers kept plugging away. Anstrup Majumdar battled for 52 balls for his 23, but Bengal beat lost their last five wickets for just nine runs to be bowled out for 173.

Jammu and Kashmir signed off their Vijay Hazare campaign with a comprehensive 79-run win over Assam in their last Group C match at the SSN College Ground, Chennai on Thursday.

Opting to bat, Jammu and Kashmir were helped to 272/7 with openers Ahmad Bandy (79) and Shubham Khajuria (72) conjuring a 148-run partnership for the opening stand. The middle order didn t contribute much as Jammu and Kashmir ended with a competitive total.

In reply, a listless Assam were skittled out for 193 in 48.2 overs. Skipper Amit Sinha was the only batsman who managed to get some runs, scoring 81, but received no support from the other end with six Assam players dismissed for single-digit scores. For J&K, Irfan Pathan and Umar Nazir claimed three wickets each.

Here’s how the action unfolded on Thursday. Click here. 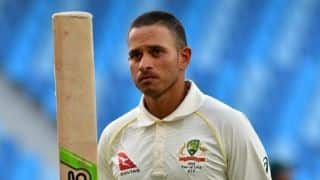