A round-up of the Elite C matches on day four of the 2018-19 Vijay Hazare Trophy.

A round-up of the Elite C matches on day four of the 2018-19 Vijay Hazare Trophy.

Tamil Nadu were helped by crucial lower-order contributions as they narrowly beat Rajasthan by one wicket. Reduced to 93 for eight, Shahrukh Khan and M Mohammed provided Tamil Nadu much-needed support after their top order was blown away by Deepak Chahar and TM Ul Haq. Shahrukh scored 20 and Mohammed remained unbeaten on 22 to win the game for their side.

Batting first, Rajasthan were on their way to a repeat performance of their clash against Jharkhand. From 43/5, it was mostly because of TN Dhillon s half-century that Rajasthan were able to cross the 100-run mark. Barring Dhillon, only three more batsmen registered double digit scores. Left-arm spinner R Sai Kishore registered a five-wicket haul and chipped away at Rajasthan s middle order. It was Dhillon and AR Lamba s 58 run stand for the seventh wicket that allowed Rajasthan a reasonable total.

Like Rajasthan, TN too had a forgettable start and had lost half their side with 49 on board. Balchandar Anirudh weathered the storm and put 40 much needed runs with Shahrukh for the sixth wicket. Chahar, Lamba and Dhillon kept chipping away wicket wickets but couldn t stop Mohammed from guiding the team home.

Led by captain Amit Mishra s 3/26 in 10 overs, Haryana registered a three-wicket win against J&K after the Parvez Rasool-led team was bowled out for 108. Ahmad Banday and Shubham Khajuria posted 27 for the opening wicket before wickets started tumbling. Paras Sharma s contribution of 25 was the only substantial contribution before Arun Chaprana, Rahu Tewatia and Jayant Yadav strangled the scoring.

In reply, Irfan Pathan reduced Haryana to 5/3 and at one point, his figures read 3-4-3-2. They recovered through N Saini, H Rana and Pramod Chandila, who contributed with 19, 30 and 29. Auqib Nabi s dismissal of Rana and Chandila off consecutive balls must have sent some panic waves but Jayant resisted to see his side through.

Patel, playing as an outstation player, batted through the innings scoring 135 off 153 deliveries with the help of 13 boundaries. Fellow opener NN Sen Chowdhary made 53 off 70 while middle-order batsman BR Shetty scored 37 off 32.

After opting to bat first, skipper Manoj Tiwary lead the way with a run-a-ball 67. SD Chatterjee made 44 while AP Majumdar scored 48 off 35. Barman s 16-ball 25 helped Bengal to 271 for nine. 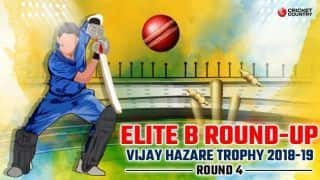