A round-up of the Elite Group A matches on day two of the 2018-19 Vijay Hazare Trophy.

Himachal Pradesh rebounded from defeat to Punjab in round one by defeating Railways by 33 runs on the VJD Method at Alur on Thursday. The bowlers led the way to keep Railways to 187 in 47.5 overs, with former India Under-19 cricketer Mayank Dagar taking 4/38 and Ayush Jamwal netting 3/36.

Himachal fell to 30/2 before the captain Prashant Chopra hit 77 off 93 balls and Nikhil Gangta 50 from 91 balls to put the chase on track. A brief wobble ensued when Gangta and Amit Kumar departed in relative succession, but that was to prove a momentary blip for Himachal who were 170/5 in the 42nd over when rain arrived. Chopra s 77 came a day after he made 95 versus Punjab.

At the M Chinnaswamy Stadium, rain had a say as hosts Karnataka fell to a 57-run loss on the VJD Method to Maharashtra. Karnataka were 107/6 in the 23rd over when rain arrived, and as per the numbers that was enough for Maharashtra to be declared winners.

The visiting team had been carried to 245/8 in 50 overs thanks to an unbeaten 104 off 115 balls from Ankit Bawne, with skipper Rahul Tripathi contributing 70 off 68 balls. From Tripathi s dismissal in the 35th over, Maharashtra slipped from 165 to 320 with Bawne s hundred a very critical effort.

Baroda won a rain-hit match with Vidarbha on the VJD method, reaching 151/2 in 29 overs in pursuit of a target of 55. Kedar Devdhar (46), Aditya Waghmore (50) and Krunal Pandya (34*) were the key scorers before rain interrupted their chase. Vidarbha had been bowled out for 254 in 50 overs with Lukman Meriwala taking 3/54.

They would be disappointed at that total given that their openers Atharva Taide (57) and Faiz Fazal (56) put on 114 in 21 overs. 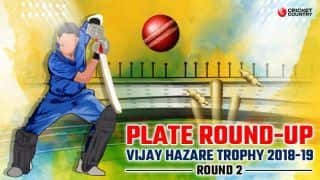