Jharkhand will now face Delhi in the second semi-final on Thursday.

Jharkhand s unbeaten run in the Vijay Hazare Trophy 2018-19 season continued with a comprehensive eight-wicket win via the VJD method over Maharashtra in the quarter-finals at the M Chinnaswamy Stadium in Bengaluru on Monday. Jharkhand will now face Delhi in the second semi-final on Thursday.

Put into bat, Maharashtra suffered a top order collapse and slipped to 72/4 in the 16th over. None of the top four batsmen, barring opener Swapnil Gugale got going. However, after 38 deliveries out of which he struck four boundaries, Gugale perished for 22 after he was caught by Rahul Shukla to give pacer Varun Aaron his first wicket. Shukla was responsible for claiming the wicket of the other opener Ruturaj Gaikwad, who departed for 11.

It took a 76-run partnership between wicketkeeper-batsman Rohit Motwani and skipper Rahul Tripathi to bail their side out of trouble. Tripathi was denied his fifth List A half century and was out for 47 after he was caught by Sumit Kumar off left-arm spinner Anukul Roy, who was the pick of the Jharkhand bowlers with career-best figures of 4/32 in his nine overs. Roy claimed the next two wickets of Shrikant Mundhe (9) and Shamshuzama Kazi (2) to leave Maharashtra in all sorts of trouble at 169-7 in the 40th over. In the 42nd over, Roy dismissed well-set batsman Motwani for 52 as Maharashtra were back in the hut for 181 in 42.2 overs.

In the rain-curtailed encounter, Jharkhand s revised target was brought down to 127 in 34 overs. The chase was not so convincing. Opener Anand Singh succumbed to the pressure of playing too many balls and was trapped lbw after a 36-ball 12 to give Samad Fallah his first wicket. Skipper Ishan Kishan then build a 40-run partnership with Shasheem Rathour before Kishan was caught by Motwani off Mundhe for 28.

Jharkhand batsmen ensured they were ahead by 18 runs according to VJD method when rain arrived. They required 38 in 42 deliveries on resumption. Saurabh Tiwary (29) and Rathour (53) took control and ensured Jharkhand chase their target without casualties. 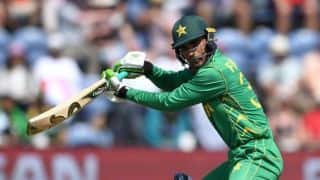 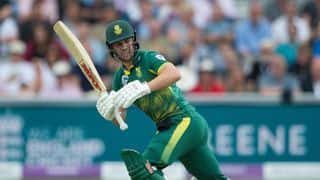