A round-up of the Plate Group matches on day three of the 2018-19 Vijay Hazare Trophy.

A round-up of the Plate Group matches on day three of the 2018-19 Vijay Hazare Trophy.

Techi Doria became the first centurion from Arunachal Pradesh, hitting 122 off 149 balls in a total of 306/4 in 50 overs versus Sikkim. That was more than enough to give Arunachal their second win of the competition.

Sikkim had their own centurion in skipper Nilesh Lamichaney who made 123 off 145 balls while adding 99 with Faizan Khan (47) for the opening wicket. Once Seth removed Khan the partnerships dried up, and with Techi Neri s double-strike in the 41st over the match was finished as a contest. Lamichaney was out in the 49th over for his maiden century.

At Nadiad, an unbeaten century from former Karnataka wicketkeeper-batsman KB Pawan took Nagaland to their landmark first victory in List A cricket, steering them to a target of 247 in the 48th over for the loss of three wickets. Pawan, who made his debut in 2007 with Karnataka, scored his third List A century (113* off 131 balls) and added 133 for the second wicket with Sedezhalie Rupert (50) and 97 with Rongsen Jonathan (43).

A century to Uttarakhand opener Karanveer Kaushal in the state s second List A match set up the state s first win over Puducherry.

Kaushal s 100 off 114 balls helped Uttarakhand overcome the loss of former Rajasthan opener Vineet Saxena for 1, and with help from Vaibhav Bhatt (73) he took the score to 175/2. Uttarakhand managed 125 runs in the last 15 overs, with the former Tamil Nadu allrounder Malolan Rangarajan hitting an unbeaten 36 off 26 balls and Saurabh Rawat 35 off 20 balls.

Former Mumbai captain Abhishek Nayar made a run-a-ball 95 but lacked up support. Sunny Rana fetched himself 4/52 to cap a landmark win for Uttarakhand. 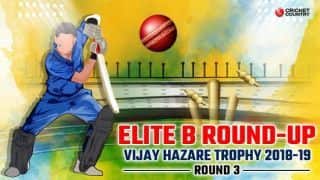 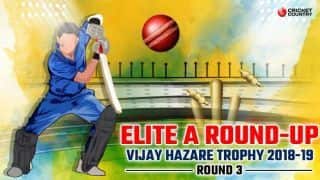