A round-up of the Plate matches on day four of the 2018-19 Vijay Hazare Trophy.

A round-up of the Plate matches on day four of the 2018-19 Vijay Hazare Trophy.

Nagaland sailed to their second win of the season as they beat Sikkim by seven wickets at the Moti Bagh Stadium in Vadodra. Chasing 122, Nagaland recovered from an early blow to chase down the target in 26.2 overs with KB Pawan hitting an unbeaten 83.

After opting to field first, Nagaland made early inroads as Ravi Maurya striking in consecutive overs to get rid of Sikkim openers inside five overs. Captain Nilesh Lamichaney was the first to depart after being bowled for a seven-ball duck. Faizan Khan holed out on 7 to leave his team in early trouble.

Plazor Tapang and Asish Thapa stabilised the innings after the early tremors with a 53-run stand for the third wicket. Tahmeed Rahman broke the partnership when had Tamang caught on 22. That wicket triggered a slide from which Sikkim never recovered.

While Asish stuck around, others failed to offer him support. He scored 46, hitting five fours, and became Imliwati Lemtur second victim. Three Nagaland bowlers – Maurya, Rahman and Lemtur picked up two wickets each as Sikkim were bowled out for 121 in 49 overs.

In reply, Nagaland lost opener Nitesh Lochab for a first-ball duck to Padam limboo. However, that was just an abberation in an otherwise comfortable chase. With eight fours and two sixes, he was the star of the chase. Though Nagaland lost two wickets I in the space of three deliveries, but by that time, they needed just 35 runs to win.

Pawan guided them home with Abrar Kazi, who remained unbeaten on 18.

The other two matches of the group – Arunachal Pradesh vs Manipur and Mizoram vs Puducherry were abandoned without toss due to rain. 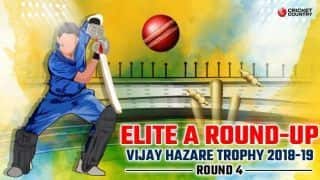